William Pentland at Forbes relays word from Lockheed Martin that might truly be historic.

In the simplest terms, nuclear fission breaks a single atom into two whereas nuclear fusion combines two atoms into one. 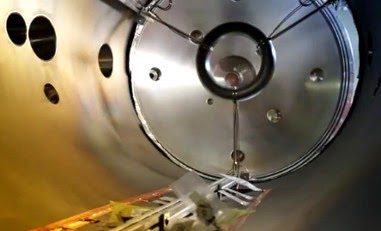 Fusion, the holy grail of nuclear power, creates three to four times as much energy as fission. More importantly, fusion’s key advantage over fission is that it does not produce cancer-causing radioactive waste...

...Tom McGuire, who heads the project, told Reuters that his team had been working on fusion energy at Lockheed’s Skunk Works program for the past four years, but decided to go public with the news now to recruit additional partners in industry and government to support their work. 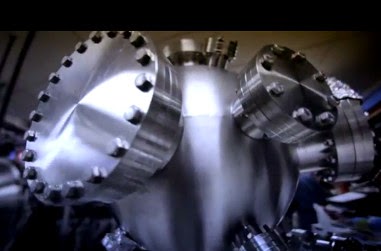 “It’s safe, it’s clean, and Lockheed is promising an operational unit by 2017 with assembly line production to follow, enabling everything from unlimited fresh water to engines that take spacecraft to Mars in one month instead of six,” Evan Ackerman wrote in a post about Chase’s Google talk on Dvice.

The key breakthrough involves using a “magnetic bottle” to contain the vast amount of heat, which rises into the hundreds of millions of degrees, created by the nuclear reaction. Containing and controlling the staggering levels of heat and pressure involved has hampered countless previous efforts to use fusion for generating electricity. The challenges associated with controlling the heat and pressure created by nuclear fusion has been especially difficult at smaller scales, which makes Lockheed’s claimed breakthrough all the more impressive.

“By containing this reaction, we can release [the heat] in a controlled fashion to create energy we can use,” Lockheed said in a statement. “The heat energy created using this compact fusion reactor will drive turbine generators by replacing the combustion chambers with simple heat exchangers. In turn, the turbines will then generate electricity or the propulsive power for a number of applications.”

And (whisper voice): no one tell the Eco-Marxists. They'll find a way to tax, block or regulate any advance like this one.

at 9:18 PM
Email ThisBlogThis!Share to TwitterShare to FacebookShare to Pinterest
Labels: Engineering, Scitech

How is a few million degrees considered safe?

Don't worry, the EPA and "environmentalists" will find a way to stop it.

Deuterium is 22.85 per liter (I don't know at what pressure).
In 2003 Tritium was $30,000 per gram, and was expected to exceed $100,000 per gram in the future. Tritium is the most expensive commercially available substance you can buy. It requires fission reactors to manufacture.