Larwyn's Linx: If It Damages America, It’s Good for Democrats 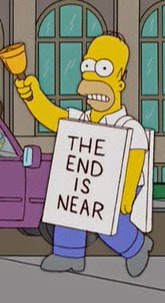 What Hillary meant to say: "If you like your job, you can keep your job": WyBlog
‘Too late, Grandma': Hillary Clinton flip-flops, now says that entrepreneurs create jobs: Twitchy
“The hell with his minimum wage raise, we don’t have any jobs”: LI

Watch One of the Greatest Political Speeches in US History: Signal
Cuomo to Possible Ebola Victims: Now That You've Got Some Time, Read My Book: MenRec
I don’t think this is what Ronnie meant by our “rendezvous with destiny.”: MOTUS

Image: Climate Doomsday draws near: just 37 days to go
Today's Larwyn's Linx sponsored by: You Must Give Money Now!

QOTD: "The left's worst crime in the Middle East is its craven love for tyranny, for grand empires built on race and religion, over the national and political rights of the minority. These Apartheid states are all they care about. Their greatest effort has been set not on resolving the stateless problems of the Kurdish minority, on the national borders of Armenia or ending the Turkish occupation and settlement of Cyprus-- but on adding yet another Arab-Muslim state to the region.

Palestine, the cynical project of Pan-Arabist and Pan-Islamist thugs, is the great obsession of the left. Because if there's one thing that the Middle East doesn't have enough of, it's totalitarian regimes built on Arab and Islamist identity. And the one thing it has too much of is democratic state with a non-Arab and non-Muslim majority. And that one thing is what they are committed to destroying." --Daniel Greenfield

How far is America from utter destruction when what we SEE is described as something different, where what it is spun is then packaged to support the "company line"? I suppose not far if the American people keep gumming Goobermint pap instead of demanding real food.

Are Washington voters smart enough to see they are being played by Bill Gates and his deceptive gun initiative?

Yea, most people move West to escape radicals like Bloomberg, and Washington State is no exception. He's not one of us, let's hope the Voters push this one aside.
http://gunowners.org/fact9252014.htm