VILE: Chris Christie sticks a knife in Scott Walker's back

Dan Riehl points us to a disturbing revelation by the Weekly Standard.

As background, New Jersey Gov. Chris Christie serves as Chairman of the Republican Governors' Association (RGA). In that capacity, Christie controls the purse-strings of a substantial pot of dough that would normally be deployed to the most competitive gubernatorial races for GOP candidates.

Despite rumors of Christie undermining Walker's campaign by withholding precious funding, GOP insiders had earlier assured the Standard that Christie had Walker's back. It would appear that they were lying. 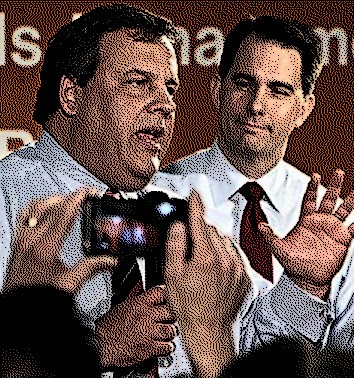 The RGA had already spent $6 million overall in Wisconsin, the source said, and would spend a total of $10 million or $11 million by Election Day – up to an additional $5 million to shore up Walker in a competitive race. The majority of the money the RGA had spent – and planned to spend – would be on television ads. Those numbers, this source pointed out, compare favorably to RGA spending next door in Michigan ($10 million to date), where Governor Rick Snyder has held a small but consistent lead in public and private polling. “So when all is said and done, we’ll spend more in Wisconsin than Michigan,” the source told us.

...Our “GOP source with knowledge of RGA spending” told us [that] the RGA is committing to just $2 million now – that’s not an increase over their original amount, as RGA officials told the Post, it would appear to be a significant reduction.

What's more, Wisconsin GOP sources dispute the RGA's claim to have spent $6 million to date, putting the figure at closer to $3 million.

...the RGA is now conceding that they are spending more on Michigan ($10 million to date) than Wisconsin... In the RealClearPolitics average of polls over the last three weeks (9/30 through 10/19) [Michigan Gov. Rick] Snyder has a 5.6 point lead.

...In Wisconsin, by contrast, Democrat Mary Burke has led or been tied with Walker in nearly half of the polls taken since April (7 of 16). On Thursday, the Milwaukee Journal Sentinel reported that "Burke and her allies have outspent the governor and his allies on broadcast television, $8.2 million to $7.4 million, according to data compiled by the Center for Public Integrity," but "Republicans are believed to have a spending advantage" on cable. Campaign spending is just one factor out of many that can determine the outcome of a close race, but the race in Wisconsin couldn't get any closer. Walker and Burke are now tied--47.3 percent to 47.3 percent--in the average of polls.

Like 2012 -- when the New Jersey governor threw Mitt Romney under the bus by offering numerous photo ops and a tacit endorsement of Barack Obama after Hurricane Sandy -- it would seem that Chris Christie's number one job is promoting Chris Christie.

If that means sabotaging a potential 2016 rival for the GOP presidential nomination, so be it. Christie is a perfect representative of the GOP establishment; he fits in seamlessly with other selfish "me-firsters" like Karl Rove, Mitch McConnell and John Boehner.

Chris will never outlive the fact that he is Nu Joisey's answer to Deliverance's Ned Beatty, (and Bloomburg plays the banjo).

Exactly. The article is right on.
Outside money is pouring into Wisconsin. The hard left have targeted Walker and are methodically stealing the election. Whether it be the endless vans of voters being driven to polls in Milwaukee and Racine County, or the Burke ads, which contain nothing but total and complete lies, the hard left is on the march. Their hatred of Walker is something to behold. And it is that; nothing but total hatred. Burke is unqualified and, frankly, an embarrassment. But that doesn't matter because the election is not about Burke. It is about hating Scott Walker. I'm afraid the election is already over. The margin of fraud is too great. The "progressives" simply upped their Al Gore strategy. Christie sees this and is content Walker was taken out by the hard left. He probably thinks that opens things up for him. Christie, however, is nothing. He'll never win a national race. Ever.

In an attempt to demonstrate her broadmindedness, my flaming liberal sister opined that Chris Christie was "okay".

That was all I needed to know about HIM.

Trialdog, I too fear the fraud and not just in Wisconsin.