The Penultimate Indictment of Barack Obama

Leadership: The former president on whose watch Americans were taken hostage and the mullahs rose to power in Iran gets it right in condemning the current president's failed handling of Syria and the Islamic State. 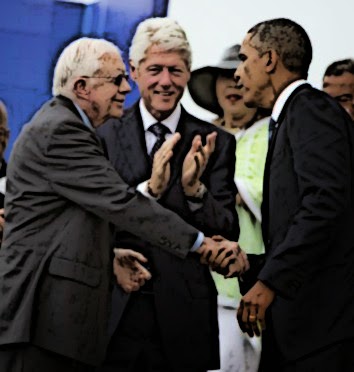 We've often referred to Jimmy Carter as our worst president. But considering the recent IBD/TIPP poll showed 53% of Americans labeling Barack Obama's presidency a failure in just its sixth year, the incumbent may soon claim the title. It's one thing to make mistakes out of gullibility, quite another to foul up the world out of gross incompetence.

It is said that Carter's presidency literally crashed and burned in the Iranian desert with the failed Desert One Delta Force mission that was sent to rescue our embassy hostages from the clutches of the mullahs he had naively helped to power. But as we have noted, at least Carter tried a rescue, as President Obama failed to do at Benghazi as he rested up for a Las Vegas fundraiser.

Carter at least acknowledged and belatedly learned from his mistakes. As James Jay Carafano of the Heritage Foundation points out, Carter, after the Soviet invasion of Afghanistan, declared the "Carter Doctrine" and warned the Soviets that the U.S. would defend its interests in the Middle East "by force if necessary." That, presumably, included the threat of boots on the ground.

Carter ordered a rapid deployment force with the ability to project American power quickly in a crisis in the Persian Gulf. He proposed increased defense spending when the post-Vietnam budgets were in free fall and the atrophy of military readiness had begun.

So it's not surprising to hear Carter, in an interview with the Fort Worth Star-Telegram, condemn Obama's "strategy" in fighting the Islamic State. Obama has refused to acknowledge his foreign policy mistakes or learn from them.

Echoing criticism from none other than the last two secretaries of defense, Robert Gates and Leon Panetta, Carter said Obama "waited too long." "We let the Islamic State build up its money, capability and strength and weapons while it was still in Syria," he said. Carter also "noticed that two of his secretaries of defense, after they got out of office, were very critical of the lack of positive action on the part of the president."

Indeed, Obama dithered and watched ISIS grow, ignoring and not reading most of the Presidential Daily Briefings that warned of its rise. It all occurred as the red lines that he drew vanished and the Syrian dictator he said had to go remained in power. "Then when (ISIS) moved into Iraq," Carter continued, "the Sunni Muslims didn't object to their being there, and about a third of the territory in Iraq was abandoned."

The rise of the Islamic State indeed filled a power vacuum of Obama's making, so intent was he on fulfilling a campaign promise rather than defend U.S. national security interests.

So what would Carter do in 2014? He would put boots on the ground in the form of Special Forces as part of a sustained and effective air campaign rather than the sporadic and laughable strikes taking out a truck here or a bulldozer there.

Unfortunately, you also need someone in the Oval Office whom our friends respect and our enemies fear. We don't know what Obama's golf handicap is, but he is certainly ours.

How about this penultimate indictment: he is a traitor.

How long will it finally take enough people to realize that?

TFR - Hussein has to be an American to be a traitor. I rather doubt that he is (and not by location of birth). He certainly hates American and her people. He is the enemy within.

I suggest you look up "penultimate" in a dictionary. It doesn't mean what you seem to think it means.

It means second to last, because my hope is the very last indictment of this egregious man is a real indictment.

Now, don't let the blog's door hit you on the ass on your way out.

Thanks for that re buttal, I must admit I was wondering. I like the idea of the ultimate indictment, can we have some this side of the pond if there's any to spare?