CHART O' THE DAY: Who Trusts Which News Sources?

RedState's 'streiff' ("Why @BuzzFeed isn’t trusted by anyone explained in one post") points us to some excellent charts from Pew Research on political polarization and the media. 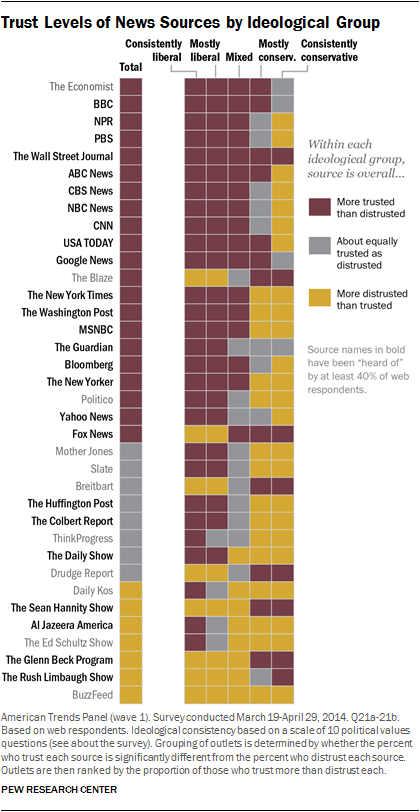 ...At least as important as where people turn for news is whose news they trust. And here, the ideological differences are especially stark.

Also at play here is the degree to which people are more familiar with certain news sources than others. Some outlets such as CNN, ABC News and Fox News, are recognized by at least nine-in-ten respondents, meaning that more respondents offer a view of these outlets one way or the other. Outlets currently occupying more niche markets, such as Politico, the Economist or BuzzFeed, are known by only about a third of respondents. Thus, while they may elicit strong views in one direction, the share of respondents weighing in is relatively small.

That's very bad... for conservatives. Very bad indeed. Then again, I knew the gig was up. Priebus as the chairman, Christie as head of Republican governors, Boehner as lead in congress... Yeah... I guess this explains that. Bleh. Which is why I won't be voting. No need, or use.

@Doom, far be it from me to defend the likes of Johnny Boener and Mitch McGutless, but I'd recommend voting unless this kind of thing appeals to you.