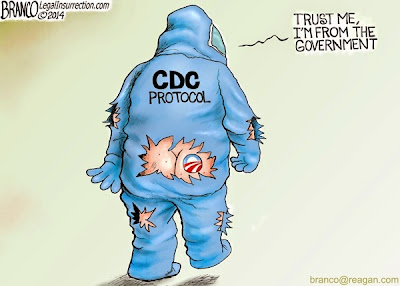 While the nurses in Texas were dealing with an Ebola patient without protocols and proper equipment, the CDC continued to claim the protocols were in place and the hospitals in the U.S. were ready.

You have to understand. Ebola takes them away from their real mission which is to build bike lanes, get rid of guns, tell you what to eat, and harass anyone who builds a playground.

Politico reports (in an article written by Gov. Bobby Jindal) that “over the past five years, the CDC has received just under $3 billion in transfers from the fund. Yet only 6 percent—$180 million—of that $3 billion went toward building epidemiology and laboratory capacity.”

Protecting Americans got $180 million while community transformation got $517.3 million!

Did you think detecting and fighting infectious diseases was still their business?

What is community transformation you ask?

The CDC website says it’s “increasing access to healthy foods by supporting local farmers and developing neighborhood grocery stores,” or “promoting improvements in sidewalks and street lighting to make it safe and easy for people to walk and ride bikes.”

The goal might have worth but it has nothing to do with fighting disease. It is just one more effort by Obama to insinuate himself into every aspect of our lives by diverting funds to his ideological control freak goals instead of letting the CDC do what they were meant to do – protect Americans.

It’s ironic that a new ad is out trying to blame Republicans for the CDC failures claiming they cut funding when in fact they added funding for infectious diseases. It’s made even more ironic by the fact that Democrats have diverted the money to health food markets and bike paths. Check out their website.

Every agency has been politicized and is being used to further Obamanism.

The Washington Post had a good piece out yesterday about why the CDC can’t do their job.

The CDC is busy trying to pass universal helmet laws. That takes time and money and they have that to waste apparently.

They also have a yen for nationalizing playground equipment. They have developed a “national action plan” on playgrounds and have conducted studies without end on the subject.

The CDC won a $10 million grant, the Washington Post tells us, to study violent video games and media images to assess “existing strategies for preventing gun violence and identifying the most pressing research questions, with the greatest potential public-health impact.”

Why is the CDC studying gun violence and wasting efforts on helmet laws you ask?

I have absolutely no idea.

Other things they are involved in that is none of their business: anti-smoking propaganda, anti-bullying lessons, gender inequity studies and unlimited behavior modification programs that treat individual lifestyle choices — as diseases.

The CDC was all in on the Global Wash Your Hands Day last week but of course that wouldn’t help if you were exposed to Ebola.

They conduct very meaningful studies like this one in 2006: Reducing the Impact of Green Tobacco Sickness among Latino Farmworkers. (That was sarcasm on my part.)

The cherry on the sundae, and this is according to both the Washington Post and NY Post, the CDC misused funds awarded by Congress. A $7.5 million grant slated for research on the hantavirus, for instance, went instead to other programs of their choosing. The problem is they were supposed to go back to Congress to get the okay but didn’t.

It’s understandable that the CDC was unprepared for a dangerous infectious disease in the United States. They are busy taking care of malnutrition in Yemen, polio vaccines in DRC, Ebola in Uganda, field training in Nigeria, diphtheria in Indonesia, Malaria in Malaysia, safe water around the world, disease detection in Guatemala, and anything concerning Haiti.

It’s no wonder they can’t fit us into the schedule. They are another World Health Organization but they’re a bad version.

I’m not saying they shouldn’t spend some efforts on diseases overseas but we should be their first priority. Studying Ebola in Uganda obviously didn’t get translated into coherent Ebola protocols in the United States.

The CDC’s Obama mission in part:

CDC works 24/7 to protect America from health, safety and security threats, both foreign and in the U.S. Whether diseases start at home or abroad, are chronic or acute, curable or preventable, human error or deliberate attack, CDC fights disease and supports communities and citizens to do the same.

CDC increases the health security of our nation…

The CDC believes this can be done through neighborhood transformation by “increasing access to healthy foods by supporting local farmers and developing neighborhood grocery stores,” and “promoting improvements in sidewalks and street lighting to make it safe and easy for people to walk and ride bikes.”

If they’re working 24/7 to protect Americans from harm – and Dr. Frieden did say the motto is ‘Do no harm’ – then they’d better get cracking and I don’t mean by conducting more studies on guns and tobacco or promoting bike lane construction.

Like all of Obama’s agencies, they do what Mr. Obama wants and, when it goes awry, no one is held accountable.

Now you see why they are just too busy to fit us into their schedule. It’s enough that they’ve given us Dr. Frieden to reassure us with his transparently inaccurate information.

How come fictional TV and movies have better has-mat suits than they use in the hospitals?