Say, how are Mr. Obama's "trickle up" policies working out for the poor and the middle class?

Mr. Obama and his sycophants have long pilloried "trickle down economics" (which only means people get to keep more of their money to save, invest and buy things -- as opposed to the government forcibly taking it, laundering it through their vast federal bureaucracy, and then redistributing it to favored constituencies).

Others more properly refer to it as "trickle-up poverty."

The UK's Telegraph headlines their recap of the post-2009 malaise in plaintive terms: "Life under Obama sucks... and these numbers prove it" and has a chart that illustrates the point.

Quality of life is poor. Starting at the very bottom, poverty levels point to stagnation. In January 2009 the poverty rate stood at 14.3 per cent. It rose to around 15 per cent and then fell back down in 2013 to 14.5 per cent (but the actual number of those in poverty remained the same from 2012). Things are worse for black Americans, whose poverty rate has risen in that same period from 25.8 per cent to 27.2 per cent... 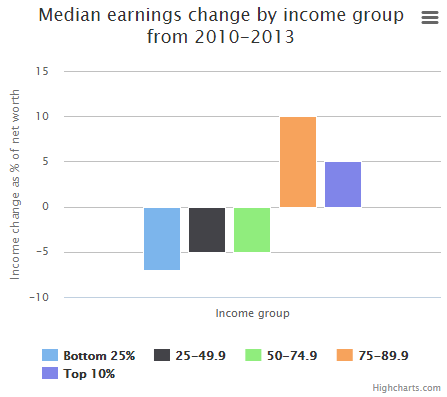 ...Not everyone’s doing badly, of course. The richest 10 per cent are the only group – the only group! – who saw their median income rise from 2010-2013. As the Washington Times points out, that’s the same period in which Barack Robin Hood Obama won re-election painting the GOP as corporate vampires. The richest people have seen their share of taxes decline quite dramatically under this “socialist” president – while, interestingly, the share of federal income tax paid by the middle class has, according to the IRS, slightly risen...

...In short, the middle class has good reasons to be frustrated with Obamanomics – especially given that the President has so often claimed to be on the side of the little man but has largely operated to the benefit of the super rich. In fact, I wouldn’t blame Mitt Romney if he secretly cast a ballot for Obama in 2012.

It's gotten so bad that Joe Biden stated that -- thanks to Obama's policies -- the "Middle Class has been left behind."

As Deroy Murdock recently observed, black Americans are worse off under Obama.

One hopes that more and more of the beleaguered urban poor emulate Chicago activists Paul McKinley, Mark Carter, Joseph Watkins and Harold “Noonie” Ward to exact some political revenge against their oppressors.