By Karen Zeigler and Steven A. Camarota 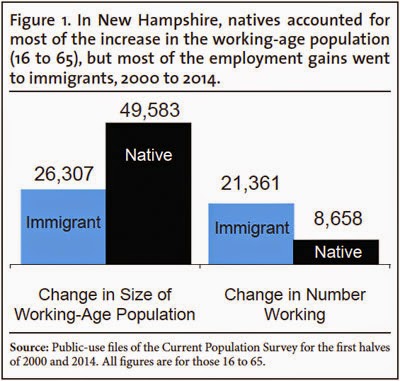 The Gang of Eight immigration bill (S.744) passed last June would have roughly doubled the number of new foreign workers allowed into the country, as well as legalized illegal immigrants.

Both of New Hampshire’s senators voted for it.

An analysis of government data by the Center for Immigration Studies shows that since 2000, 71 percent of the net increase in the number of working-age (16 to 65) people holding a job in New Hampshire has gone to immigrants (legal and illegal) — even though the native-born accounted for 65 percent of population growth among the working-age. As a result, the share of natives holding a job in the state has declined significantly. The decline in employment has been felt primarily by natives without a college education.