Public Health: The man whose one job is to safeguard America's health has failed, saying that we must change our responses to Ebola after a Dallas health care worker becomes infected despite the rules he championed. 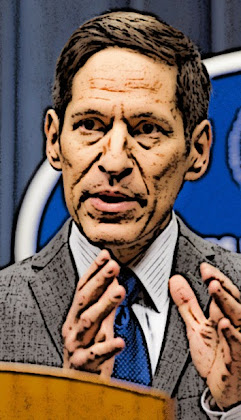 After 26-year-old Dallas health care worker Nina Pham became the first person to contract Ebola on U.S. soil, Dr. Thomas Frieden, director of the Centers for Disease Control (CDC), said during a press conference that (we) "have to rethink the way we address Ebola control."

Yes, we do. Pham's infection, just as Thomas E. Duncan's death in Dallas after a multistop trip from Liberia, wasn't supposed to happen with CDC's protocols. Frieden's repeated assurances that everything possible was being done have been demonstrably false.

Blaming Pham, who contracted the disease while caring for Duncan despite taking recommended protections and wearing the proper gear, Frieden said that "at some point there was a breach in protocol, and that breach in protocol resulted in this infection."

He later walked back his remarks. But if the protocols were adequate, why do we need to rethink them?

She got infected when her gloved hand inadvertently touched her face while removing her protective gear.

In August, two American aid workers who contracted Ebola while working in Liberia returned to the U.S. for treatment. That those trying to treat Ebola patients and fight the disease's spread — people aware of the dangers and practicing the prescribed protocols — still catch the disease doesn't bode well. Bringing back infected Americans under controlled conditions is one thing. Unrestricted air travel from West Africa is quite another.

The fact is that Duncan should never have been let into the U.S. It's irrelevant that he lied on his exit form in Liberia. Ebola has an incubation period of some 21 days, which, in the absence of a travel ban, lets untold numbers of infected people come to the U.S. Taking their temperatures as they de-plane doesn't work.

The CDC and President Obama assure us you can't get Ebola from sitting next to someone on a bus even though crowded public transit is a prime method of transmission in West Africa. If someone next to you with Ebola sneezes or coughs, does that count? Ebola can survive on surfaces for days, which is why the cleanup of Duncan's apartment was so thorough.

Health expert Betsy McCaughey writes that University of Illinois epidemiologists say Ebola "has the potential to be transmitted through aerosol particles both near and at a distance from infected patients" even though the CDC tells us Ebola isn't an airborne disease.

As we've seen, there's no margin for error with Ebola, a virus that may mutate into other more deadly and communicable forms. CDC assurances alone won't stop it. Peter Piot, who discovered the virus in 1976, says even the best prepared hospitals and caregivers can get infected. "The smallest mistake can be fatal," he says.

There's only one way to prevent the spread of an epidemic, and that's quarantine. Frieden takes the Obama administration position that we shouldn't ban travel because it would cause panic and unrest in West Africa.

( http://www.vox.com/2014/8/10/5980553/ebola-outbreak-virus-aerosol-airborne-pigs-monkeys )
=== ===
[edited] Six piglets with Ebola were next to four monkeys separated in cages, 8 inches between the cages. Two of the monkeys caught Ebola, fast enough to know they caught it from the pigs.

The difference between pigs and people is that pigs sneeze a lot from Ebola, much more than people do.
=== ===

Our government, the CDC (Centers for Disease Control), and many public agency doctors are using the technical definition and misleading the public by the common definition. It seems that they want to prevent panic more than give clear knowledge. They have succeeded also in harming health care workers.

Flu and measles viruses among others are truly airborne. Flu virus particles survive for days after drying out, both on surfaces and as particles in the air. They can float or lie around for days and infect another person, and can travel through ventilation systems. I infer that they are not very sticky, and so are not stopped entirely by hitting surfaces along their way.

Ebola is more delicate, but clearly very dangerous. It dies a few hours after drying. It definitely can be transmitted airborne while in aerosols, wet droplets just sneezed out. If an ebola sufferer sneezes near you, you can be infected. I think the smallest droplets could dry in the air, float around, and be infectious for a few hours.

I think the CDC and government spokesmen are essentially lying to the public. They say that Ebola is not airborne. Technically true, but a lie in the common meaning. You can catch Ebola through the air even hours after the victim has sneezed.

Government spokesmen say that you can catch Ebola only through direct contact, a lie in the common meaning. I call touching a surface indirect contact. Cleanup after an Ebola victim requires a full hazmat suit with eye, mouth, and breathing protection