The invaluable Sharyl Attkisson has the scoop.

To Sonya Gilliam, a recent account of improper sorting of Benghazi-related documents at the State Department brought back vivid memories of her own encounters with high-level government officials who withheld, deleted or destroyed public records.

And one name stood out for its familiarity: Cheryl Mills.

A former deputy assistant secretary of state had told The Daily Signal that Mills was present during an after-hours document operation in a basement room of the State Department in October 2012. Mills was chief of staff to then-Secretary of State Hillary Clinton. 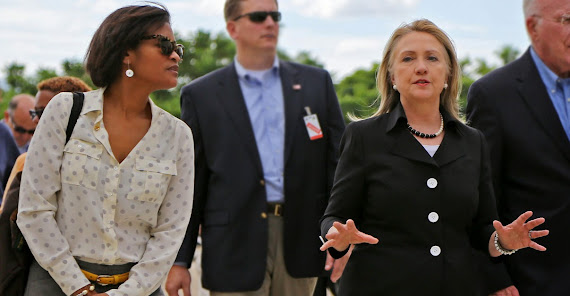 The purpose of the session, former State Department official Raymond Maxwell said, was to “separate” documents damaging to Clinton before records were turned over to an independent review board probing the Sept. 11, 2012 terrorist attacks on the U.S. mission in Benghazi, Libya.

“My stomach dropped,” Gilliam says about hearing the allegation last month that Mills was involved in Benghazi document sorting:

I said to myself, oh my gosh, here we are, 14 or 15 years later, [and] Cheryl Mills is still in charge of document ‘production’—I’ll use that term loosely.

Gilliam, now retired, was responsible for Commerce Department responses to Freedom of Information Act requests during the Clinton administration.

Back then, Mills was deputy White House counsel to President Clinton. At the time, multiple probes sought to determine whether the administration was fundraising illegally by selling seats on Commerce Department trade missions.

You can read the entire report here.

Reason #4,032 that I penned an open letter to Rep. Michele Bachmann asking her to get to the bottom of these Clinton scandals once and for all.

After all, what difference does it make?