Theft: As "calibration errors" switch votes in Illinois and Maryland, an election watchdog group sues the latter over massive voting by noncitizens in one county after discovering voters registered in multiple states. 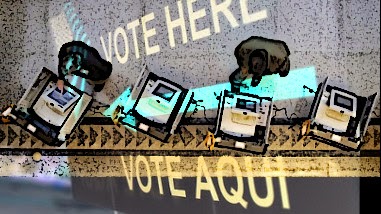 The fact that many people will do anything to get out of jury duty has exposed massive fraudulent voting in Frederick County, Md., that may have been going on for years. Illegal aliens who stated they were noncitizens on jury duty forms were found to have cast votes in elections.

The Virginia Voters Alliance (VVA) cross-checked jury duty forms with individual voting records and found that hundreds of voters in that one Maryland county cast votes after reporting they were noncitizens. One in seven Maryland residents are noncitizens, so extrapolating the number of possibly illegal votes cast in recent elections over the entire state hints at possible election-changing fraud.

Maryland is one of many states that in the process of making it easier to vote has also made vote fraud easier to commit. Maryland both issues driver's licenses to illegal aliens and has a Motor Voter law that allows that license to be used to register and vote.

The VVA filed suit Friday in U.S. District Court in Maryland asserting that individuals who opted out of jury duty as noncitizens have been able to cast votes in at least three Maryland elections.

Based on the number of these unqualified voters in Frederick County, it is estimated that up to 7% of Maryland's registered voters could be illegal immigrants, enough to swing elections.

"Their continued appearance on these lists makes it nearly impossible for Maryland law to prevent these declared noncitizens from casting votes in elections and significantly affecting the integrity and outcomes of overall electoral processes," said VVA President Reagan George.

As we noted earlier, when the VVA cross-checked voter rolls in Virginia and Maryland, it announced that it had turned up 44,000 people registered to vote in both states at the same time. The group also identified 31,000 dead voters via the Social Security Administration's Death Master File.

Maryland has also produced cases of "calibration error," where a person casting a vote sees in the voting summary the machines display that the vote has been counted for their candidate's opponent. In Illinois, when Illinois Republican state representative candidate Jim Moynihan voted early, he was stunned to find the vote he had cast for himself had been counted as a vote for his rival.

In another episode in downstate Illinois, which has a tight race for governor, the GOP candidate for Congress in IL-17, Bobby Schilling, says he has received 20 reports from supporters who said that when they tried to cast votes for him, their votes were counted for his opponent, incumbent Democratic congresswoman Cheri Bustos.

Early voting is also underway in Maryland, and reports of machine switching of votes are emerging there, as well. Kathy Szeliga, a GOP member of Maryland's House of Delegates, told CBS Baltimore reporter Meghan McCorkell that it happened to her.

"I kept pushing the Republican guy's name and the machine kept going beep, beep, beep," as it steadfastly refused to count her vote as cast.

Democrats have long pushed for voting ease at the expense of voting integrity, pushing measures from voting by mail, to Motor Voter laws, to same-day registration, while opposing voter ID laws that require people to show up on election day with proof that they are who they say they are.

The day after resigning as attorney general, Eric Holder told the Congressional Black Caucus that the voter ID laws he and his Justice Department opposed were answers to a problem that "doesn't exist."

The problem of vote fraud does exist, but when all the errors seem to benefit your political party, it's easy to turn a blind eye.

Wouldn't we love to see indictments come down right after Obama leaves office?

BTW, every jury form I have ever seen, when you truthfully answer the questions, one of which asks are you a US citizen, requires that you date and sign such form. Right above the signature line is a signing statement that always states, to the effect, that to the best of your knowledge, the questions you have answered, you have answered honestly, UNDER THE PENALTY of PERJURY. Arrest the bastards, and fine them for perjury, or voter fraud, one or the other.

Presidwnt Hillary and her A.G. will then say, "What difference does it make, now that former POTUS Obama has instituted amnesty for these now-documented "residents"? After all, she will contend, it is "unjust to disenfranchise these people who live among us without giving them an equal voice in their government". It will be the "progressive" argument for advancing "civil rights. Hold on to your seats, fellow conservatives, we are about to lose the influence needed to have a real voice at the political table if this voter fraud happening today is allowed to stand.

What the hell is wrong with the Grand Jury in Maryland?