The extent of and continuing increase in inequality in the United States greatly concern me. The past several decades have seen the most sustained rise in inequality since the 19th century after more than 40 years of narrowing inequality following the Great Depression. By some estimates, income and wealth inequality are near their highest levels in the past hundred years, much higher than the average during that time span and probably higher than for much of American history before then. It is no secret that the past few decades of widening inequality can be summed up as significant income and wealth gains for those at the very top and stagnant living standards for the majority. I think it is appropriate to ask whether this trend is compatible with values rooted in our nation’s history, among them the high value Americans have traditionally placed on equality of opportunity.

While I could pick through her entire speech, the part I put in in boldface really jumped out. “Stagnant living standards for the majority” for the past few decades? Really? 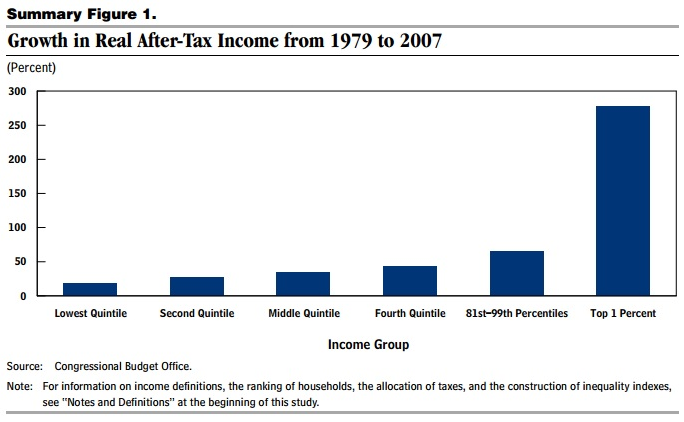 I don’t think that is correct. According to the Congressional Budget Office, average real after-tax household income between 1979 and 2007, grew by 275% for the top 1%, by 65% for the next 20%, and by 40% for “the 60 percent of the population in the middle of the income scale (the 21st through 80th percentiles).” Those numbers more or less match the findings of researcher Richard Burkhauser who finds a 37% increase in median incomes over that same span. Now, 40% isn’t 275%, but it is also not stagnation.

Here is Manhattan Institute’s Scott Winship on the same topic:

The story over the long-run is one of strong improvement in living standards, driven in part by greater work and higher wages among women, but in part by continued gains in male earnings, declining family size, lower taxes, and more federal and employer benefits. While the range of estimates is wide, a reasonable conclusion from the totality of the evidence is that poor and middle class households are at least 30 percent richer today than their counterparts from 35 years ago.

Of course, we all wish middle-class incomes had risen more — just like we all wish, for instance, the US education system had better prepared a generation of Americans for success in a post-industrial economy facing intense global competition. But too often the stagnation argument is used as a cudgel against the beneficial tax and regulatory policies of the 1980s forward. President Obama has done this repeatedly. But I would expect a more careful, data-driven analysis by the Fed chair.

We all knew this woman was an incompetent political hack and her appointment to this post as ridiculous as President Ebola Boy's appointment of his new 'Ebola czar.'

Of course, Fed policy wouldn't be contributing to said "inequality," now, would it? God forbid there would be anywhere besides the market to put what one might have, to actually EARN something with it.