Remember the movie 300, when King Leonidas punted the messenger of Xerxes into a bottomless pit while reminding him that "This. Is. Sparta."?

It would seem that America may be a few days away from drop-kicking the Democrat Party into the same pit while shouting "This. Is. America."

Here are the latest midterm election updates from our summer intern, @BiffSpackle: 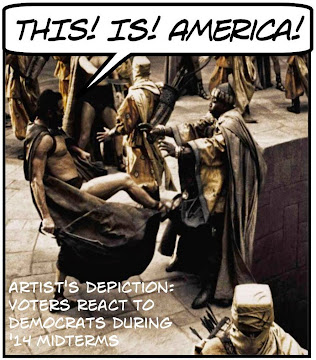 @ArgusMontgomery reports on how the GOP is winning the early vote in SD, http://argusne.ws/1DySFZh.

@CGDeaton reports how the latest poll that has Millennials wanting Republicans in control of the Senate, http://redalert.io/1tPF5ki.

Colorado's election 'day' nearly half over; signs of anxiety on left

@ByronYork reports on how the Dems are failing to get votes in Colorado’s first mail only election, http://washex.am/1q0njVg.

@AlexPappas catches Nunn pretending to be ignorant about the Ferguson flier, http://bit.ly/1rTz7Jn.

Eight Democratic Candidates That Are Embarrassing Their Party

@GCDickens details 8 gaffes from Dems that embarrass their whole party and the MSM ignored, http://bit.ly/103ZmFn.

@NolteNC reports on how the latest attack against from BuzzFeed is getting torn apart by MSM reporters, http://bit.ly/1tE5a4C.

@IJReview has the tape of Hagan twisting her in knots trying to avoiding commenting on Obama, http://bit.ly/1vilbtz.

@RNCResearch breaks down the latest poll that has Walker up big, http://bit.ly/103ZV21.

@KarinAgness writes about Cosmo’s latest form of talking down to young women by inferring that they will only show up to the polls if topless models take them, http://washex.am/1tPGreJ.

@stuntbrain has the tape of a crowd leaving while Obama was talking, http://bit.ly/10zM4Sa.

Dem Fail of the Day: Begich doubles down on sexist attack