Is Ebola Being Used as a Biological Weapon Against the U.S.?

Over the past few weeks, I've had people at speaking engagements ask me if I thought the Islamic State or some other militant group is using Ebola as a biological weapon, or if such a group could do so in the future. Such questions and concerns are not surprising given the intense media hype that surrounds the disease, even though only one person has died from Ebola out of the three confirmed cases in the United States. The media hype about the threat posed by the Islamic State to the United States and the West is almost as bad. Both subjects of all this hype were combined into a tidy package on Oct. 20, when the Washington Post published an editorial by columnist Mark Thiessen in which he claimed it would be easy for a group such as the Islamic State to use Ebola in a terrorist attack. Despite Thiessen's claims, using Ebola as a biological warfare agent is much more difficult than it might appear at first blush. 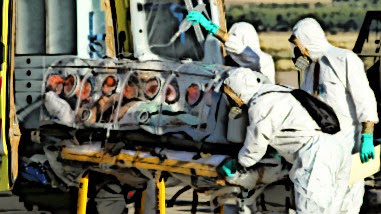 In the past, there have been several outbreaks of Ebola in Africa. Countries included Sudan, Uganda, the Republic of the Congo and the Democratic Republic of the Congo, and several comparatively small outbreaks occurred in Gabon as well. In most cases, people who handled or ate animals infected with the disease started the outbreaks. "Bushmeat," or portions of roasted meat from a variety of wild animals, is considered by many to be a delicacy in Africa, and in a continent where hunger is widespread, it is also a necessity for many hungry people. After several months of medical investigations, epidemiologists believe the current outbreak most likely began when a two-year-old child in Guinea touched or perhaps ate part of an infected animal such as a bat or monkey.

The source of the disease means it is highly unlikely that some malevolent actor intentionally caused the latest outbreak. Besides the fact that the current outbreak's cause has been identified as a natural one, even if a transnational militant group such as the Islamic State was able to somehow develop an Ebola weapon, it would have chosen to deploy the weapon against a far more desirable target than a small village in Guinea. We would have seen the militants use their weapon in a location such as New York, Paris or London, or against their local enemies in Syria and Iraq.

As far as intent goes, there is very little doubt that such a group would employ a biological weapon. As we noted last month when there was increased talk about the Islamic State possibly weaponizing plague for a biological attack, terrorist attacks are intended to have a psychological impact that outweighs the physical damage they cause. The Islamic State itself has a long history of conducting brutal actions to foster panic.

In 2006 and 2007, the Islamic State's predecessor, al Qaeda in Iraq, included large quantities of chlorine in vehicle bombs deployed against U.S. and Iraqi troops in an attempt to produce mass casualties. The explosives in the vehicle bombs killed more people than the chlorine did, and after several unsuccessful attempts, al Qaeda in Iraq gave up on its chlorine bombings because the results were not worth the effort. Al Qaeda in Iraq also included chemical artillery rounds in improvised explosive devices used in attacks against American troops in Iraq on several occasions. Again, these attacks failed to produce mass casualties. Finally, according to human rights organizations, the Islamic State appears to have recently used some artillery rounds containing mustard gas against its enemies in Syria; the group presumably recovered the rounds from a former Saddam-era chemical weapons facility in Iraq or from Syrian stockpiles.

The problem, then, lies not with the Islamic State's intent but instead with its capability to obtain and weaponize the Ebola virus. Creating a biological weapon is far more difficult than using a chemical such as chlorine or manufactured chemical munitions. Contrary to how the media frequently portrays them, biological weapons are not easy to obtain, they are not easy to deploy effectively and they do not always cause mass casualties.

The Difficulty of Weaponization

Ebola and terrorism are not new. Nor is the possibility of terrorist groups using the Ebola virus in an attack. As we have previously noted, the Japanese cult Aum Shinrikyo attempted to obtain the Ebola virus as part of its biological warfare program. The group sent a medical team to Africa under the pretext of being aid workers with the intent of obtaining samples of the virus. It failed in that mission, but even if it had succeeded, the group would have faced the challenge of getting the sample back to its biological warfare laboratory in Japan. The Ebola virus is relatively fragile. Its lifetime on dry surfaces outside of a host is only a couple of hours, and while some studies have shown that the virus can survive on surfaces for days when still in bodily fluids, this requires ideal conditions that would be difficult to replicate during transport.

If the group had been able to get the virus back to its laboratory, it would have then faced the challenge of reproducing the Ebola virus with enough volume to be used in a large-scale biological warfare attack, similar to its failed attacks on Tokyo and other Japanese cities in which the group sprayed thousands of gallons of botulinum toxin and Anthrax spores. Reproducing the Ebola virus would present additional challenges because it is an extremely dangerous virus to work with. It has infected researchers, even when they were working in laboratories with advanced biosafety measures in place. Although Aum Shinrikyo had a large staff of trained scientists and a state-of-the-art biological weapons laboratory, it was still unable to effectively weaponize the virus.

The challenges Aum Shinrikyo's biological weapons program faced would be multiplied for the Islamic State. Aum Shinrikyo operatives were given a great deal of operational freedom until their plans were discovered after the 1995 sarin attacks on the Tokyo subway. (The group's previous biological weapons attacks were so unsuccessful that nobody knew they had been carried out until after its members were arrested and its chemical and biological weapons factories were raided.) Unlike the Japanese cult, the Islamic State's every move is under heavy scrutiny by most of the world's intelligence and security agencies. This means jihadist operatives would have far more difficulty assembling the personnel and equipment needed to construct a biological weapons laboratory. Since randomly encountering an infected Ebola patient would be unreliable, the group would have to travel to a country impacted by the outbreak. This would be a difficult task for the group to complete without drawing attention to itself. Furthermore, once group members reached the infected countries, they would have to enter quarantined areas of medical facilities, retrieve the samples and then escape the country unnoticed, since they could not count on randomly encountering an infected Ebola patient.

Ebola's Weakness as a Weapon

The Ebola disease is also somewhat slow to take effect, and infected individuals do not become symptomatic and contagious for an average of 8-10 days. The disease's full incubation period can last anywhere from two to 21 days. As a comparison, influenza, which can be transmitted as quickly as three days after being contracted, can be spread before symptoms begin showing. This means that an Ebola attack would take longer to spread and would be easier to contain because infected people would be easier to identify.

Besides the fact that Ebola can only be passed through the bodily fluids of a person showing symptoms at the time, the virus in those bodily fluids must also somehow bypass the protection of a person's skin. The infectious fluid must enter the body through a cut or abrasion, or come into contact with the mucus membranes in the eyes, nose or mouth. This is different from more contagious viruses like measles and smallpox, which are airborne viruses and do not require any direct contact or transfer of bodily fluids. Additionally, the Ebola virus is quite fragile and sensitive to light, heat and low-humidity environments, and bleach and other common disinfectants can kill it. This means it is difficult to spread the virus by contaminating surfaces with it. The only way to infect a large amount of people with Ebola would be to spray them with a fluid containing the virus, something that would be difficult to do and easily detectable.

Thiessen's piece suggested that the Islamic State might implement an attack strategy of infecting suicide operatives with Ebola and then having them blow themselves up in a crowded place, spraying people with infected bodily fluids. One problem with this scenario is that it would be extremely difficult to get an infected operative from the group's laboratory to the United States without being detected. As we have discussed elsewhere, jihadist groups have struggled to get operatives to the West to conduct conventional terrorist attacks using guns and bombs, a constraint that would also affect their ability to deploy a biological weapon.

Even if a hostile group did mange to get an operative in place, it would still face several important obstacles. By the time Ebola patients are highly contagious, they are normally very ill and bedridden with high fever, fatigue, vomiting and diarrhea, meaning they are not strong enough to walk into a crowded area. The heat and shock of the suicide device's explosion would likely kill most of the virus. Anyone close enough to be exposed to the virus would also likely be injured by the blast and taken to a hospital, where they would then be quarantined and treated for the virus.

Biological weapons look great in the movies, but they are difficult and expensive to develop in real life. That is why we have rarely seen them used in terrorist attacks. As we have noted for a decade now, jihadists can kill far more people with far less expense and effort by utilizing traditional terrorist tactics, which makes the threat of a successful attack using the Ebola virus extremely unlikely.

Evaluating Ebola as a Biological Weapon is republished with permission of Stratfor.