IT'S COME TO THIS: Obama has secret plans to import Ebola-stricken illegal aliens into U.S.

Public Safety: To get other countries to send medical teams to West Africa, the State Department created plans to treat infected noncitizen doctors and health care workers in the U.S. This would put Americans' health at risk. 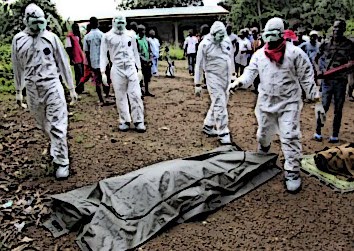 As we look for our new Ebola czar on the side of milk cartons, we can clearly see the chaotic handling of the few Ebola patients who have reached our shores. We watch shifting guidelines from the Centers for Disease Control etched in sand, the sending of U.S. soldiers into the hot zones of West Africa without any real plans on how to handle their return, and governors struggling to fill in the leadership gap left by the administration's malpractice.

The limited number of cases has burdened the few hospitals capable of handling Ebola with excessive costs and commitments of doctors and nurses — who put themselves at risk — as well as the task of finding all those that the infected individuals may have come in contact with. Quarantines are mandatory, then they are not, and self-monitoring is supposed to be enough to safeguard the health of the American people.

Despite historical and medical evidence that quarantines at the source of infectious epidemics are the only way to stem the tide, the Obama administration is not only refusing to impose a travel ban from West Africa, which Australia has imposed, but is actively considering bringing noncitizens who are infected to America to be treated.

An internal State Department memo obtained by Fox News marked "sensitive but unclassified" recommends that State and Homeland Security "devise a system for expeditious parole of Ebola-infected noncitizens into the United States as long as they are otherwise eligible for medical evacuation from the Ebola-affected countries and for entry into the United States."

According to the memo, the U.S. needs to show "leadership" that encourages other countries to send in their medical teams to assist our efforts. These include countries such as Australia that have sensibly imposed travel bans.

The "greatest single impediment to persuading other countries to send medical teams to Ebola-affected countries has been the lack of assured medical evacuation and treatment for responders who may be infected with the Ebola virus," the memo adds.

The State Department denies any such plans are in the works despite its memo proposing they be considered and developed. Fox News was told by a State Department official that there are "absolutely no plans to medevac non-Americans who become ill from West Africa to the United States."

Despite administration denials, Rep. Bob Goodlatte, R-Va., chairman of the House Judiciary Committee, said that his office and members of the media "have received confidential communications saying that those plans are being developed."

"This is simply a matter of common sense that if you are concerned about this problem spreading — and this is (such) a deadly disease that we're even concerned about the great health care workers when they come back not spreading it — we certainly shouldn't be bringing in the patients," he said.

This sense of urgency was not seen in the treatment of U.S. veterans who died or committed suicide while waiting extended periods for treatment at Veterans Affairs facilities.

CDC Director Tom Frieden has said he was "open to ideas" to keep American citizens "as safe as possible." In addition to a travel ban, which we've already advocated, how about stopping this foolish proposal to import Ebola into the U.S. and put more Americans at risk?

My guess is that they're already here. Probably placed in hospitals in Red States....