ANOTHER EBOLA CASE? Vermont Man Under Quarantine After Return From West Africa

Mike relays this late-breaking news from the Maple Syrup State: 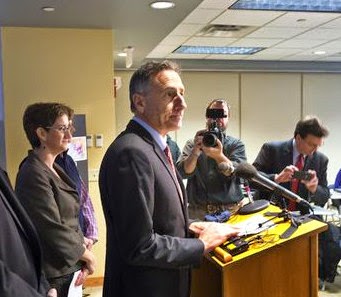 The measure is a precaution as the man has exhibited no symptoms of Ebola.

"There is extremely low risk, in my judgment, of this individual contracting Ebola," Shumlin said. "However we're going to take every precaution to keep the public safe and to act in this individual's best interest."

The man is a Rutland resident, city Mayor Christopher Louras wrote in a statement, which he posted on his Facebook page about 30 minutes after the conference.

Shumlin said the quarantine is taking place in Vermont but outside a health care facility. The man is housed in a "safe, rural setting" with a law enforcement presence. He will be monitored for 21 days, the governor said.

Acting Health Commissioner Tracy Dolan also spoke at the event. She said that health care workers are not using protective gear in caring for the man and have not received specialized training.

Shumlin declined to specify what kind of law enforcement was present, but he said the expenses were being covered by the state.

It would seem that the Center for Disease Control is as confused as the rest of this administration. The CDC now tells us that "the protocol for individuals who do not display Ebola symptoms but are returning from countries where the virus is widespread will be determined on a case-by-case basis."

In other words, they're winging it.

"...being paid for by the state. How comforting. Glad it's not MY state.

What me worry? (Thank you Alfred E. Shumlin)Rutland is about 75 miles south and the wind usually blows from the north or west this time of year.

No hazmat? Just rub maple syrup over all exposed areas.

Glad he's in quarantine. Did he fly direct from Liberia to Vermont international airport? Oh, that's right, Vermont doesn't have a major airport. So he interacted with all kinds of people on the way home. Cat's already out of the bag. Gosh, I hope this doesn't tie up both of Vermon't state police.