A new ad put out by the left-wing Advocacy Project seeks to link Republican budget cuts with the spread of the Ebola virus, a shameful fear tactic that could take hold among a populace rightfully concerned about this epidemic. While media organizations such as Time Magazine and Real Clear Politics have reported on the existence of the video, all they did was cite the ad, not challenge the veracity of its information. In doing so, they’re acting as vehicles for spreading its misinformation. 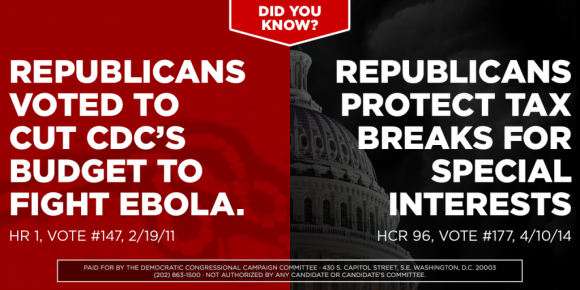 The Heritage Foundation’s news website, The Daily Signal, reported that “Erica Payne, the founder and president of The Agenda Project, told CNN that ‘people should be deathly afraid of Republican policies,’ and that there is ‘no question’ about the link between budget cuts and Ebola.”

The Washington Post’s fact-checker Glenn Kessler calls the arguments in this ad, and the similar strategy by the Democratic Congressional Campaign Committee of blaming Republicans for cuts, “absurd.” He bestows such claims with four Pinocchios. According to him, appropriations for the Centers for Disease Control and National Institutes of Health are down, but this has as much to do with bipartisan action and inflation as anything else. “Obama’s Republican predecessor oversaw big increases in public-health sector spending, and both Democrats and Republicans in recent years have broadly supported efforts to rein in federal spending,” he writes. In other words, both parties have increased and decreased health care budgets. “There’s no doubt that spending has been cut, or at least failed to keep pace with inflation, but the fingerprints of both parties are on the knives,” he writes.

But the news media have taken this Democrat message and tried to further it in its own reporting, either by disseminating the ad or through outright partisanship. MSNBC’s Joy Reid tweeted on October 12, “To the anti-government wingers in my thread: so far, the only ‘spread of Ebola’ in the U.S. was caused by a private hospital in a red state.” This comes from the same news channel where a host claimed that Alton Nolen’s beheading of an innocent woman in Moore, Oklahoma had as much to do with Islam as what the alleged perpetrator ate for breakfast.

While some in the news media seem content to blame the GOP for cuts in the government’s protective apparatus, resulting in the spread of Ebola, the data shows that misplaced priorities may have contributed to the crisis rather than budget cuts overall.

The Centers for Disease Control budget has, indeed, declined since 2010—from $6.5 billion to $5.8 billion, according to CDC data. However, an examination of the chart provided by the CDC shows that the shortfall has been largely made up by Prevention and Public Health Fund monies, which are added above and beyond the declining budgetary authority. In addition, President Barack Obama’s suggested Fiscal Year 2015 budget would reduce the CDC budgetary authority to $5.4 billion, below even Fiscal Year 2014 and 2013 levels.

According to The Hill newspaper, presidential hopeful Hillary Clinton recently slammed the sequester, saying, “The [Centers for Disease Control and Prevention] is another example on the response to Ebola—they’re working heroically, but they don’t have the resources they used to have.”

Republican Louisiana Governor Bobby Jindal hit back hard, writing for Politico magazine that “In recent years, the CDC has received significant amounts of funding. Unfortunately, however, many of those funds have been diverted away from programs that can fight infectious diseases, and toward programs far afield from the CDC’s original purpose.” According to his data, of the Prevention and Public Health Fund (PPHF) monies—which, as discussed, are often making up the shortfall in funding—only six percent over the last five years was used for “building epidemiology and laboratory capacity.” And, “While protecting Americans from infectious diseases received only $180 million from the Prevention Fund, the community transformation grant program received nearly three times as much money—$517.3 million over the same five-year period,” Governor Jindal writes. The PPHF is part of Obamacare.

What is community transformation? Such funding is spent on neighborhood grocery stores, sidewalks, and street lights. These things are clearly outside the traditional CDC mission. Kessler failed to discuss this aspect of the CDC’s misplaced priorities.

If these things are promoted by the PPHF, shouldn’t we call these, at least in part, President Obama’s misplaced priorities? And if the Democratic President Obama is proposing a cut in the CDC budget as well, the liberal media and Democrats cannot fairly blame budget cuts solely on Republicans.

National Institutes of Health director Dr. Francis Collins recently told The Huffington Post that “Frankly, if we had not gone through our 10-year slide in research support, we probably would have had a vaccine in time for this that would’ve gone through clinical trials and would have been ready.”

But the NIH has been spending its resources over the last several years—nearly $3 million as of this August—measuring why American lesbians are obese but American gays are not. And it spent nearly $400,000 in 2012 to study the appropriate duration of massage in rabbits, one of among a number of NIH funded studies that Forbes found questionable. The Heritage Foundation adds to that reprehensible record studies on “the sex lives of fruit flies and another looking into the communication skills of chimpanzees that throw their own feces.”

The Daily Signal also notes that NIH spending hovered around $30 billion from 2010 to 2013, and that the current budget request “puts spending at the same level.” The Washington Post’s Glenn Kessler describes the NIH as having “relatively little change in the size of the budget,” but down a bit when accounting for inflation. And, The Daily Signal states, the infectious diseases branch of NIH simply “did not regard Ebola as a top priority prior to the current outbreak,” preferring instead to prioritize AIDs, malaria, influenza, and hepatitis C. The lukewarm interest may have been affected by a history of relatively few cases of Ebola, according to The Daily Signal.

As for the World Health Organization, New York Times correspondent Sheri Fink told NPR in September that “these were cuts that happened during the global financial crisis. And the WHO’s proposed two-year budget, a billion dollars had to be knocked off.” But, Fink continues, “…it was not just the budget cuts. It was also the prioritization. So I think it was 16 percent of staff were cut across the organization. About 35 percent were cut in the departments that deal with outbreak preparedness and response.” In other words, WHO shortsightedly cut those persons dealing with “outbreak preparedness and response,” as opposed to other programs.

Fink also said, “To break it down really simply, 20 percent of the WHO’s budget comes from these assessed dues to its member nations. And then 80 percent are a matter of voluntary contributions.” According to this chart from WHO, net assessed contributions from the United States were the same for 2014 and 2015, and when compared with older data, one sees that assessed contributions for WHO from the U.S. government have increased since 2007, and are remaining relatively stable. If WHO is suffering budget-wise, it’s not the U.S. government’s fault.

Efforts to blame the Republican Party for budget cuts at these health organizations are based on misinformation, and don’t pass the litmus test. But in an election season, do the liberal mainstream media really care about facts? Or are they desperately seeking any means possible to help the Democrats retain control of the Senate?

Read more at Accuracy In Media

The GOP is still listening to idiots of the likes of Karl Rove, so expect no push-back from them.

Are you still voting for or donating to the GOP? If so, look in the mirror: you'll see one hell of a glutton for punishment.

The stupid party should have anticipated this attack as that is what Democrats do. Lie and accuse their opponents of that which they themselves are guilty of. Aided by the propaganda "news" media the lie is spread far and wide so that the low info voter has all of information they need to keep the Marxists in power. As TheFineReport stated, expect no pushback from the GOP.