WHO YOU GONNA TRUST ON EBOLA? The Center for Infectious Disease Research -- or Dr. B.H. Obama?

Obama: “You Cannot Get Ebola Sitting Next to Someone On a Bus” 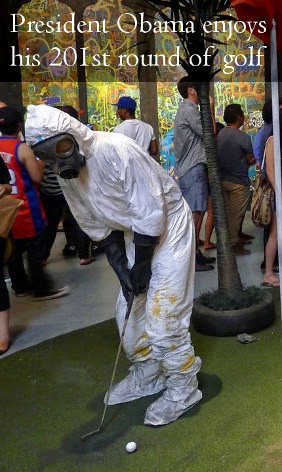 “First, Ebola is not spread through the air like the flu,” Obama explained in the video released by the White House Thursday. “You cannot get it through casual contact like sitting next to someone one a bus. You cannot get it from another person until they start showing symptoms of the disease, like fever.”

Obama also explained that “the most common way you can get Ebola is by touching the body fluids of someone who is sick or has died from it, like their sweat, saliva or blood, or through a contaminated item like a needle.”

We believe there is scientific and epidemiologic evidence that Ebola virus has the potential to be transmitted via infectious aerosol particles both near and at a distance from infected patients, which means that healthcare workers should be wearing respirators, not facemasks.1

The minimum level of protection in high-risk settings should be a respirator with an assigned protection factor greater than 10. A powered air-purifying respirator (PAPR) with a hood or helmet offers many advantages over an N95 filtering facepiece or similar respirator, being more protective, comfortable, and cost-effective in the long run.

We strongly urge the US Centers for Disease Control and Prevention (CDC) and the World Health Organization (WHO) to seek funds for the purchase and transport of PAPRs to all healthcare workers currently fighting the battle against Ebola throughout Africa—and beyond.

Is there anything this walking, talking catastrophe has gotten right?

Please: any of you drones out there, let me know in the Comments section. I've got a nice crisp $20 bill for the first "progressive" out there who can describe what Barack Obama himself has done correctly. Personally. Not Co-President Jarrett, but Barack Obama himself. Not SEAL Team Six. But Obama.

Ok, so let's ask Obama to sit down with the Dallas nurse who contracted Ebola, face to face of course, and explain to him/her how they got it.

This should not be too hard for the smartest guy in any room.

Ebola medical waste should be spread on golf courses across the nation.

Obama has made Jimmy Carter look- Not as dumb or sissified.