ISIS Begins Realizing Its "See You In New York" Threat

Terrorism: An ax attack on two New York City cops by a Muslim convert with jihadi postings on his Facebook page is yet another reminder of the prophetic warning by the leader of the Islamic State. 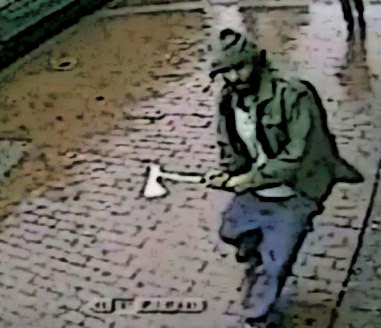 Some pundits are downplaying any connection between Zale Thompson, who attacked two New York City cops with a hatchet, and the Islamic State, which has issued a call for such actions by sympathizers in the West. This is an "isolated case," they say, an act by a "nut job" and not by a terrorist conspirator.

The Islamic State is perhaps the world's largest collection of nut jobs. How sane can someone be, taking joy in sawing off the heads of infidels like Steven Sotloff and James Foley, or delighting in kidnapping and gang-raping the Yazidi women of Iraq because they worship a different god? How sane can young women be who leave the West to journey to Syria in the hopes of being incubators for future jihadis?

In the Soviet era, we might have called the likes of Zale Thompson sleepers — individuals hidden in our free society waiting for the call to fulfill their destiny.

The current bevy of homegrown jihadis beheading office workers in Oklahoma and killing policemen and soldiers in Canada may not have been planted here by the Islamic State. But in the age of social media, they have heard their master's voice and responded accordingly.

Like the attack by Michael Zehaf-Bibeau that killed a guard at Canada's National War Memorial, and the attack on a London street that killed British soldier Lee Rigby last December, the New York ax attack is the very type of murder urged by the Islamic State on Western authority figures such as policemen and soldiers.

On the Facebook page bearing the name of Muslim convert Thompson (aka Zaim Farouq Abdul-Malik), a jihadist warrior is pictured masked in a head-and-face scarf and armed with a sword, spear and rifle, ready to do battle with Western infidels. A quote from the Quran in Arabic, speaking of judgment against those who have strayed from or resisted assimilation into the Islamic fold, serves as the page's banner.

We are reminded of the prophetic warning of Islamic State leader Abu Bakr al-Baghdadi when he was released on President Obama's watch from Camp Bucca in Iraq in 2009.

As Michael Daly pointed out recently in the Daily Beast, al-Baghdadi, aware that those guarding him were reservists from Long Island, had a few choice parting words.

"He said, 'I'll see you guys in New York,'" recalls Army Col. Kenneth King, then commanding officer of Camp Bucca. "We spent how many missions and how many soldiers were put at risk when we caught this guy, and we just released him," Daly quotes King as saying.

The threat by al-Baghdadi was not taken seriously at the time, but it should be now. The call by the Islamic State for those who can't make it to the training camps of northern Syria and Iraq to join the fight by proxy is being carried out on the streets of New York City; Moore, Okla.; and Ottawa.

Kudos to Canadian Prime Minister Stephen Harper for promptly, and accurately, calling the Parliament shooting what it was, a terrorist attack.

Michael Mukasey, U.S. attorney general from 2007 to 2009, says the unit was instrumental in finding possible terrorist ties within Muslim communities.

It just may be time for everybody to start crying wolf.