Drug smugglers are welcomed into the United States. We can assume nothing else. If they weren’t, they wouldn’t be allowed to pour across our borders; they wouldn’t be released willy nilly from prisons each year without any accountability: and we wouldn’t have a dormant deportation policy. 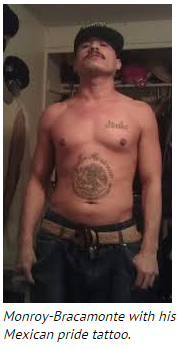 If we at least attempted to stop illegal immigration, a 17-year old illegal alien might not have been free to rape and murder his 5-year old cousin. An off-duty officer might be alive today. There is a family of four who might be living their lives as they should be.

There are two law enforcement officers who might not have died this past Friday if we at least deported narcotics traffickers.

Until they had no choice, the newspapers wouldn’t even release the fact that the alleged murderer of the officers was an illegal alien.

The man suspected of killing two deputies and wounding another during a shooting rampage in Northern California was deported twice to Mexico and had a drug conviction, federal authorities said Saturday.

Suspected cop killer Marcelo Marquez aka Luis Enrique Monroy-Bracamonte is an illegal alien criminal who was arrested and deported in 1997 and 2001. He has been living in Salt Lake City with an arrest record for possession of narcotics.

Once illegal aliens get here, there is almost no internal enforcement of our immigration laws.

On Friday, the alleged drug dealing murderer, killed two Sacramento County sheriff’s deputies while he and his wife were on a crime spree.

The attackers, believed to be Monroy-Bracamonte and his wife then shot a 38-year old man in the head while attempting to hijack his car. The man is in fair condition.

They then stole a pickup truck and fled. They parked alongside a road 30 miles from where they took off. When two deputies approached the stolen vehicle, they were shot with the AR-15 in Monroy-Bracamonte’s possession.

Homicide Detective Michael David Davis Jr., 42, died at a hospital 26 years to the day after his father, for whom he was named, died in the line of duty as a Riverside County deputy.

His father was killed on Oct. 24, 1988 in a helicopter crash while in pursuit of drug smugglers.

Deputy Jeff Davis, not a relative, was treated for a gunshot wound to the arm.

The gunman fled into a neighborhood home until police used tear gas to force him to surrender.

We have already been told that Mr. Obama plans to legalize millions after the election. The Obamanesty would cover alleged narcotics traffickers like Monroy-Bracamonte, a man who can’t even speak the language after committing crimes here since 1997.

In fact, Mr. Obama ordered the printing of 34 million green cards and blank work permits for illegal aliens. As Governor Moonbeam of California said recently, “You’re all welcome in California.”

Meanwhile, the drug and human smugglers pour across our borders.

My sources on the border tell me that a BORTAC (tactical) team was checking out known lay-up areas on the edge of the Tohono O’odham Reservation, SSW of Tucson recently when they encountered an armed RIP Crew (bandits) that opened fire on the agents. One dead, three got away. Multiple weapons recovered. BORTAC team okay.

This area is notorious for smuggling – around the clock – every day. Read more on this link.

More than 37,000 criminal aliens were released last year by the Obama administration. This goes on every day.

Both political parties bear responsibility but Mr. Obama is in a class all by himself – he’s an open borders advocate.

Watch the Memorial Procession for Deputy Mike Davis on this link and ask yourself why we are allowing this unfettered illegal immigration which includes criminals, terrorists and gang members.

So what? It's their country now.

How can we believe ANYTHING in this post, when Sara Noble can't even get BASIC FACTS correct?