New York Attorney General Andrew Cuomo is the "father of the subprime crisis" and his aggressive attacks on Wall Street could make him dangerous to the banking sector if he becomes the next governor of New York, well-known banking analyst Dick Bove told CNBC. 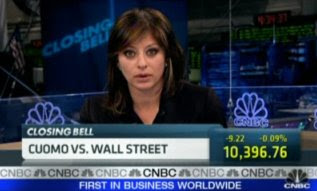 "One of the key reasons why [Fannie Mae and Freddie Mac are] bankrupt today, and why the government is spending hundreds of millions of dollars in supporting them, is because of the edicts pushed through by Mr. Cuomo," said Bove, of Rochdale Securities, in a live interview. 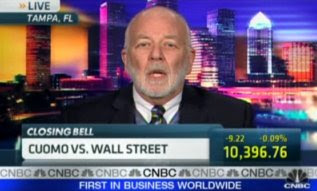 "It's also thought by many that the hundreds of thousands of people who are losing their homes, are [doing so] to a great degree because of the actions taken by Mr. Cuomo at HUD," Bove added. 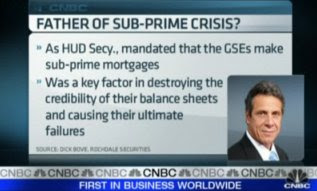 Cuomo, who was secretary of Housing and Urban Development from 1997 to 2001, has been blamed in some quarters for helping to trigger the financial crisis by pushing Fannie and Freddie to buy more subprime mortgages to increase home ownership among the poor. Many of those homeowners eventually defaulted, and the mortgage-backed securities market later collapsed.

Cuomo also has gone after Wall Street bonuses and the banking sector in general, Bove said, which could prove detrimental to the state's economy if he's elected. 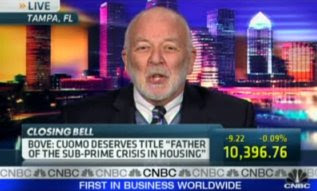 Though Cuomo has not officially announced his candidacy for the seat, he is considered by many to be a favorite in the election after Gov. David Paterson's announcement last week that he will not run for a full term... But if Cuomo does decide to run and is elected, Bove said he will quickly realize that his decisions thus far have had a negative effect on the state, and he'll need to change them. 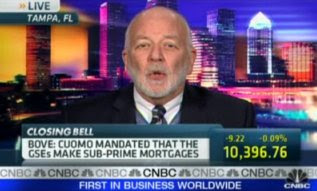 "His lack of financial acumen may prevent him from doing the right things even if he wants to," he said. "You just dont want someone with that type of lack of understanding of the financial system running a state as important as New York."

Cuomo is a menace, an economic illiterate who has largely escaped blame for his central role in touching off the mortgage meltdown.

I congratulate Dick Bove for identifying Cuomo as one of the key culprits. Cuomo should be serving time in federal lockup right now with Bernie Madoff.


Related Illustrated Story: The Fannie Mae Testimony That Will Have You Pulling Your Hair Out.

It is refreshing to see, indeed.

The Democrats, especially the Clintons, have made such a mess.

They enabled even more fraud in that case, which greatly affected the economy and thousands of Americans.

Even today, one has to wonder, if the Clinton Foundation is just one big ponzi scheme hiding as a generic feel good charity.

The DNC Titanic continues to sink us all.

And yet these crooks, ripping all off via the guise of Public Service, seem to get away with it.

1. So they're getting rid of Paterson.
2. Cuomo must be discredited as he's a likely contender.
3. Who's the seat being kept warm for? H.Clinton our next president?