Chris van Hollen's memo to Democrats describes how the U.S. Constitution will be shredded this week; the "Slaughter Rule" is a go 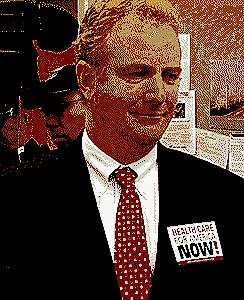 THEN: House Budget Committee must approve using the reconciliation process to pass this

THEN: The bill will go to the Rules Committee, rule will be constructed for consideration on the floor, and language will be posted online (on the Rules website) and the 72-hour clock will start. When this happens, we will start to have a better idea on what the process will be.

THEN: A Manager’s Amendment will be constructed that will make some final changes

THIS MEANS: We will likely vote Friday or Saturday. (As you probably saw, POTUS pushed back the departure for his Asian trip from Thursday the 18th to Sunday the 21st; this was not a coincidence.) The Speaker has publically committed to trying to get a vote on both the reconciliation bill and the Senate bill on the same day. They are still trying to work out the final process on this and much of what we do depends on what the Senate Parliamentarian decides. You may be receiving calls about the “Slaughter Rule” and other rumors about what the process will be. Again, please understand: no decision has yet been made on the process for consideration on the House floor.

Of course a decision has been made. We're hours away from Slaughter revealing the strategy and Democrats have no other mechanism to pass a bill other than using an extra-Constitutional procedure. They don't have the votes to pass the Senate Bill, so they are -- for the first time in U.S. history -- about to rule that they actually passed a bill they never voted on.

On Fox News Sunday, van Hollen suggested that the Slaughter Rule was still a major component of the Democrats' plans.

The Budget Committee will meet Monday to start marking up a shell of a Reconciliation Bill. The Rules Committee will then meet as early as Wednesday to hollow out whatever the Budget Committee passed and then insert a new bill from Speaker Nancy Pelosi’s (D-CA) office. The Majority is still planning to use the “Slaughter Rule” that would allow the House to pass the Senate health care bill without voting on it. Final votes are expected to stretch into the weekend.

That is why Tuesday is such an important milestone. If you have any way to get to the Capitol Building, join the march to stop the slaughter of the U.S. Constitution.

The democrats are playing with fire.

We have to be the fire.