Michael McConnell of Stanford Law: 'Slaughter solution cannot be squared with Article I, Section 7 of the Constitution'

Excerpted from tomorrow's Wall Street Journal (apologies, Rupert, but this one is way too important to keep completely behind the pay-wall):

Democratic congressional leaders have floated a plan to enact health-care reform by a procedure dubbed “the Slaughter solution.” ...Democrats would pass a rule that deems the Senate’s health-care bill to have passed the House, without the House actually voting on the bill. This would enable Congress to vote on legislation that fixes flaws in the Senate health-care bill without facing a Senate filibuster, and without requiring House members to vote in favor of a Senate bill that is now politically toxic. 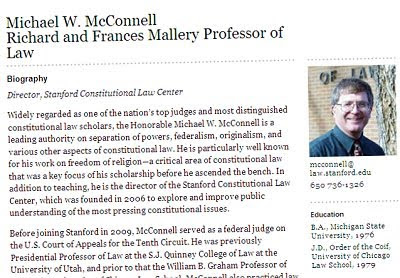 The Slaughter solution cannot be squared with Article I, Section 7 of the Constitution.

...Last Christmas Eve, the Senate approved a health-care bill by 60 votes, overcoming a Republican filibuster. This is the bill that contains the so-called Cornhusker kickback, the Louisiana purchase, taxes on high-cost health insurance plans and coverage for abortions. Virtually no one now supports that version of the bill, but Senate Democrats no longer have enough votes to pass an alternative bill under ordinary procedures.

That is where reconciliation fits in. If the House passes the Senate bill and the president then signs it into law, reconciliation would permit Congress to pass new legislation making changes to that law. Reconciliation might not solve the abortion coverage problem or other nonbudgetary issues, but it would allow Democrats to correct most of the Senate bill’s offensive features.

The rub is that, according to the Senate parliamentarian, reconciliation is permitted only for bills that amend existing law, not for amendments to bills that have yet to be enacted. This means that, for the Senate to be able to avoid a filibuster, House Democrats first have to vote for the identical bill that passed the Senate last Christmas Eve. That means voting aye on the special deals, aye on abortion coverage, and aye on high taxes on expensive health-insurance plans. Challengers are salivating at the prospect of running against incumbents who vote for these provisions.

Enter the Slaughter solution. It may be clever, but it is not constitutional. To become law—hence eligible for amendment via reconciliation—the Senate health-care bill must actually be signed into law. The Constitution speaks directly to how that is done. According to Article I, Section 7, in order for a “Bill” to “become a Law,” it “shall have passed the House of Representatives and the Senate” and be “presented to the President of the United States” for signature or veto. Unless a bill actually has “passed” both Houses, it cannot be presented to the president and cannot become a law.

To be sure, each House of Congress has power to “determine the Rules of its Proceedings.” ...But House and Senate rules cannot dispense with the bare-bones requirements of the Constitution. Under Article I, Section 7, passage of one bill cannot be deemed to be enactment of another.

The Slaughter solution attempts to allow the House to pass the Senate bill, plus a bill amending it, with a single vote. The senators would then vote only on the amendatory bill. But this means that no single bill will have passed both houses in the same form. As the Supreme Court wrote in Clinton v. City of New York (1998), a bill containing the “exact text” must be approved by one house; the other house must approve “precisely the same text.”

These constitutional rules set forth in Article I are not mere exercises in formalism. They ensure the democratic accountability of our representatives. Under Section 7, no bill can become law unless it is put up for public vote by both houses of Congress, and under Section 5 “the Yeas and Nays of the Members of either House on any question . . . shall be entered on the Journal.” These requirements enable the people to evaluate whether their representatives are promoting their interests and the public good. Democratic leaders have not announced whether they will pursue the Slaughter solution. But the very purpose of it is to enable members of the House to vote for something without appearing to do so. The Constitution was drafted to prevent that.

Mr. McConnell is a professor and director of the Constitutional Law Center at Stanford Law School and senior fellow at the Hoover Institution. He formerly served as a judge for the Tenth Circuit Court of Appeals.

McConnell's assessment squares with those of other Constitutional experts who believe that the use of the "Slaughter Solution" is "preposterous" and "dangerous".

Democrats are holding a match to the very fabric of our society.