Papa B forwarded this one:

"If the enemy is in range, so are you." — Infantry Journal

"It is generally inadvisable to eject directly over the area you just bombed." — US Air Force Manual 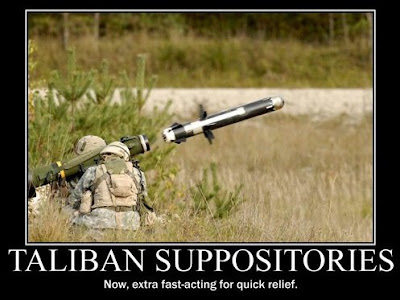 "Whoever said the pen is mightier than the sword, obviously never encountered automatic weapons." — General MacArthur

The three most useless things in aviation are: Fuel in the bowser; Runway behind you; and Air above you. — Basic Flight Training Manual

"Any ship can be a minesweeper. Once." — Maritime Ops Manual

"Never tell the Platoon Sergeant you have nothing to do." — Unknown Marine Recruit

"If you see a bomb technician running, try to keep up with him." — USAF Ammo Troop

"The only time you have too much fuel is when you're on fire." —Unknown Author

"If the wings are traveling faster than the fuselage it has to be a helicopter — and therefore, unsafe." — Fixed Wing Pilot

"When one engine fails on a twin-engine airplane, you always have enough power left to get you to the scene of the crash." — Multi-Engine Training Manual

"Without ammunition, the USAF is just an expensive flying club." — Unknown Author

"If you hear me yell; 'Eject, Eject, Eject!,' the last two will be echos. If you stop to ask 'Why?' you"ll be talking to yourself, because you're the pilot." — Pre-flight Briefing from a 104 Pilot

"Mankind has a perfect record in aviation — we have never left one up there!" — Unknown Author

"Flying the airplane is more important than radioing your plight to a person on the ground incapable of understanding or doing anything about it." — Emergency Checklist

"The Piper Cub is the safest airplane in the world; it can just barely kill you." — Attributed to Max Stanley (Northrop test pilot)

"There is no reason to fly through a thunderstorm in peacetime." — Sign over Squadron Ops Desk at Davis-Montham AFB, AZ

"If something hasn't broken on your helicopter, it's about to." — Sign over Carrier Group Operations Desk

"You know that your landing gear is up and locked when it takes full power to taxi to the terminal." — Lead-in Fighter Training Manual

As the test pilot climbs out of the experimental aircraft, having torn off the wings and tail in the crash landing, the crash truck arrives. The rescuer sees a bloodied pilot and asks, "What happened?" The pilot"s reply: "I don't know, I just got here myself!"

at 9:27 PM
Email ThisBlogThis!Share to TwitterShare to FacebookShare to Pinterest
Labels: Protecting America

And my pilot buddy's favorite aphorism:

There are old pilots.

There are bold pilots.

There are no old bold pilots.

When reporters asked Alan Shepard what he thought about as he sat atop the Redstone rocket, waiting for liftoff, he had replied, 'The fact that every part of this ship was built by the low bidder.'

A good landing is one where everyone walks away from the aircraft. A great one is where the aircraft is reusable. AH-64A pilot.

I was on a FAC Team. In our first live fire exercise we marked tagets with artillery WP, lifted the arty, then directed in the A4's.

I asked my air offier if this is the way we would do it in combat. He said:
"In combat it's Big Sky - Little Plane."

At the Langley AFB aero club in the 60s, this advice if you can't help but crash: "Hit the softest, cheapest thing as slowly as possible."