Irwin Kellner at MarketWatch reports that the economy isn't getting better. In fact, it's getting worse. Much worse. 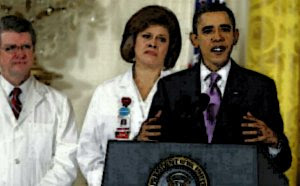 The fledgling economic recovery appears to be running out of gas... The recent run of economic data is most compelling. Just about all of them paint a picture of an economy slowing -- and sharply, at that...

-- both consumer confidence and sentiment have fallen unexpectedly;

-- sales of both new and existing homes took a surprising stumble;

-- orders for most durable goods are down;

-- jobless claims are up;

-- fourth-quarter GDP growth came largely from a slower pace of inventory liquidation, not from an increase in consumer spending;

-- and as a matter of fact, consumer spending weakened last quarter.

Understand that the changes in the data above were not insignificant:

-- new-home sales fell to record lows and they are likely to fall even further, since mortgage applications are down to 13-year lows;

-- existing-home sales are down two months in a row to a seven-month low;

-- first-time claims for unemployment benefits have risen in six of this year's first eight weeks;

-- and new orders excluding transportation fell 0.6%; orders for capital goods fell 2.5%, while capital spending itself was down a thumping 3.5%.

...the magnitude of the declines noted above suggests a message that should not be ignored... Are there any solutions to this mess?

...In my view, the best solution is a cost-free one: remove the uncertainties facing business such as regulations, costs for health care, energy and the environment, not to mention what their own tax rates will be.

You'd be surprised what this will do for hiring and thus for the economy...

Hey, Irwin: news flash -- everyone knows this. Everyone. Including the President and his sycophants in Congress. They don't care. They're committed, hard left ideologues trying to reshape our country and destroy the few remaining firewalls in the Constitution.

They're forcing Democrats to walk the plank on yet another unfunded entitlement.

In fact, the more they crush the life out of the economy with taxes, regulations and uncertainty, the greater the crisis they can precipitate. And that's what they will exploit to confiscate more and more of your private property while exercising increasing control over every aspect of your life.

The economy can't turn around until the political climate improves and November seems so far away. Will enough of the drones wake up by then (or stay away from the polls) to turn this around? And will the republicans stop acting like democrats if they are returned to power? We all better pray for both of these things to happen. Even then, we may still go off of the cliff. At least I will wake up every morning with some hope. Right now, I'm thinking that it is a better than even bet that we end up walking along behind donkeys with pots clanging on the side, looking for firewood to burn in the 55 gal. drum at the corner. Some of Jefferson's more incendiary opinions are starting to make sense.

"Unexpected", perhaps, to media supporters of the stupid-assed marxist douchebag who's run us off the cliff.

To everyone else, as inevitable as death.

Looking at Obama with the "doctor"
props reminds me of the old TV adds. The ones where a guy in a lab coat tells us that "nine out of ten doctors agree that Camels are healthy cigarettes".

The title of this, and several other posts of yours include the words "but mostly." I like this funny format. My type of sarcasm! My problem is that I see it a lot at ace.mu.nu, too. PLEASE tell me that either you are Ace, or that all the examples at one of the sites are merely guest posts from the other guy.