February was not an auspicious start to Obama's record budget deficit-busting plans. The Daily Treasury Statement for the full month of February was just released, and it disclosed that while corporate tax withholdings, net of refunds, actually climbed marginally to $3.4 billion from $(3.4) billion in February 2009, individual tax withholdings plunged to a multi-year low of $30.7 billion. 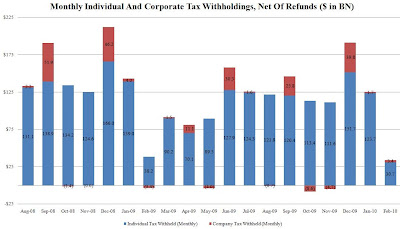 Combined, the two items also posted a multi low of $34 billion, less than the previous recent low from February 2009 when the first leg of the Greater Depression was allegedly at its zenith. We can't wait to hear how the "recession is over" brigade will paint this particular data point.

Leave it up to the White House publicists at the Bureau of Made-up Labor Statistics to take care of that problem. Count on Census hiring, for instance, to drive the unemployment rate down to -3%. 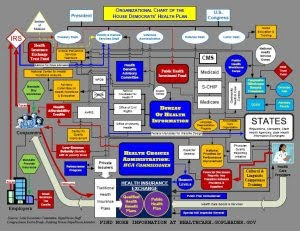 Tax revenues are plunging. States are going bankrupt. The federal deficit is exploding. And the withholding numbers are even worse than they appear: for 2010, your withholding increased, though taxes haven't changed (yet). This gives the Treasury an interest-free loan, which you'll get back in 2011 in the form of a refund.

And what are Democrats fixated on? Nationalizing the health care industry. The entire economy is melting down, and they're trying to implement death panels and giant health care databases.

No wonder Americans are livid.

It is an outrage.

Christie just made an impressive speech about this madness, and what the Democratic Party's policies have done to ruin NJ.

Sadly, we see the same insanity being pushed on the Federal Level.