Even the denizens of Journolist -- the mainstream "journalists", pundits and academics of the left -- thought Keefus was an arrogant, offensive misogynist. 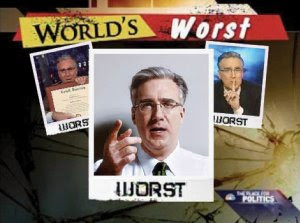 Salon’s Rebecca Traister agreed Olbermann regularly displayed his contempt for women. “Olbermann has a terrible record of going out of his way to talk about young, attractive women he believes to be stupid in grotesquely dismissive and oversexualized terms.”

Traister had written the same thing in her columns for Salon, for instance calling Olbermann out when he “felt free to call [Paris] Hilton a slut on air and speculate about whether anyone had ever ejaculated in her face.”

Blogger Lindsay Beyerstein said maybe the time was now to take down Olbermann. “When we liberals were fighting for political survival after 9/11, it was important to be disciplined and to pick our internal battles very carefully. Now that the Democrats are in charge and progressivism is ascendent, we can afford to demand more from our leaders.

“We can certainly afford to smack down Keith Olbermann when he spouts misogynist garbage,” she said.

University of Chicago Professor Harold Pollack said at the end of a long hard day, the last thing he needs is an hour with someone like Olbermann...

So who's gonna be the WORST PERSON IN THE WORLD tonight, Keefus?