Stunning photos: Janet Napolitano heralds border drug bust as proof that US-Mexico security is 'as secure now as it has ever been'

This delightful missive appears to have circulated on the inter-tubes for a few weeks and I was struck by two things. First, the fact that Janet Napoli-Reno believes that our border is as secure as it has ever been.

The second thought -- after the intermission. 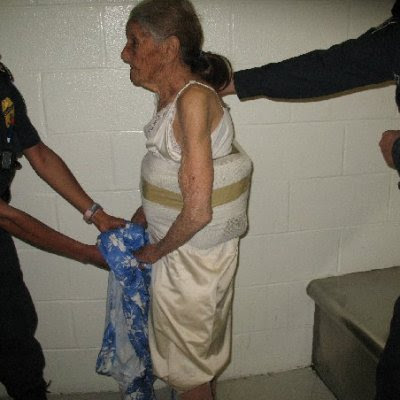 And here you have an industrious Mexican national, just simply on her way to visit friends and relatives across the international border in Arizona, all the while passing through the port of entry at Nogales, Arizona probably daily. 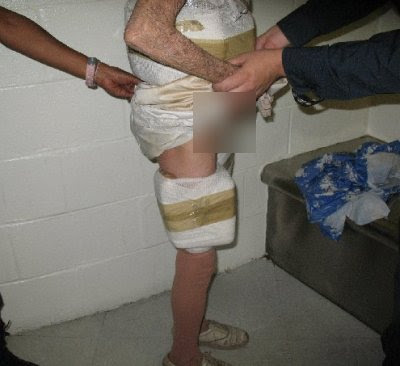 After all, she's only 94 years old, so what harm could this Mexican do. Well, I'll be dipped. What's all that padded stuff affixed to her body, underneath her dress. Well, after the dress was removed, loooookeeee here at what we have. Why it's only 10.45 pounds of marijuana strapped to her body. 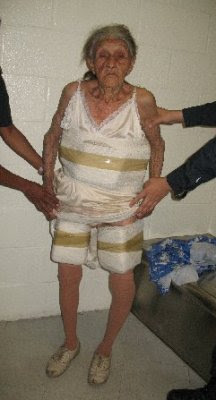 Can we blame her? After all, she's probably just supplementing her Social Security check she gets monthly at her P.O. box on the American side. And one can't help but wonder how many of these such trips has she already made across the border, toting 10.75 pounds of marijuana daily. 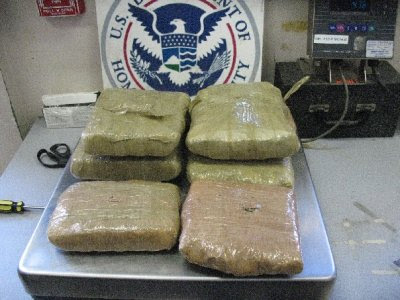 Hang it up lady, as it's time for you to retire permanently in Mexico.

Okay, the second thought struck me like a lightning bolt.

Imagine the desperation and/or viciousness that inspires nonagenarian drug smugglers. In either case, sealing the border is the one damn thing the federal government is supposed to do -- and yet, our Democrat leaders can't be bothered with that. They're too busy putting up Stimulus road signs and nationalizing health care.

Oh, and lastly, if these are the kinds of folks our dramatically understaffed and overworked Border Patrol is catching, just who in the hell is getting through? On the other hand, I'm not sure we want to know.

I wouldn't discount the viciousness of the criminals or drug cartels in mexico. This woman or her family could have been threatened with their lives if she didn't do this.

Boy, I'm glad you Americans are still making sure that Mexicans will always be employed with bringing you your drugs! That woman is LUCKY to be able to perform such a wonderful community service at her age!

Good thing nobody is allowed to just grow their own plants on their own land, huh? Otherwise this NINETY YEAR OLD WOMAN might have NOT HAD TO START SMUGGLING DRUGS ACROSS THE MOST TERRIBLE BORDER ON THE PLANET!

"In either case, sealing the border is the one damn thing the federal government is supposed to do -- and yet, our Democrat leaders can't be bothered with that."

We had Republican leaders for eight years; how come they didn't close the border? Oh, that's right, Republicans own the businesses who employ illegals on the cheap.