The NAACP was founded in 1909 to advance the cause of equality for black Americans. Over the years it defended the rights of disenfranchised voters, fought segregation, and battled southern Democrats who continually attempted to craft legislation to harm African-Americans. 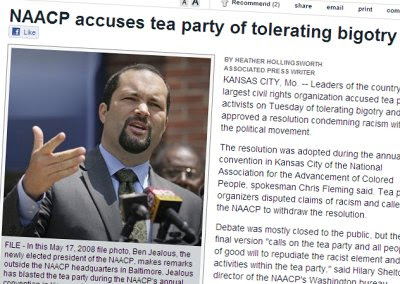 That proud history, however, has been subsumed in recent years by a series of increasingly partisan decisions that emphasize victimhood and reliance on government handouts. In essence, the NAACP leadership relies upon the Democrat Party -- no matter how awful their policies are -- and vice versa. An example is its implicit tolerance of teachers' unions at the expense of charter schools that benefit poor, urban kids most.

The group's latest embarrassment involves a resolution that claimed the grass roots Tea Parties were, by and large, "racist". The assertion was so patently ludicrous that even legacy media outlets couldn't keep a straight face.

...former Alaska governor Sarah Palin sent out a Twitter message about the group Tuesday, helping to make the NAACP convention a hot topic on conservative Web sites. She condemned the organization's passage of a resolution denouncing what it called "racist elements" within the "tea party" movement... The statement, which won overwhelming support among the group's voting members, sparked a round of denials from grass-roots conservatives and lots of media coverage.

The notion that the Tea Party movement is racist is laughably outrageous. Active Tea Party members belong to every race, religion, creed, color and culture. 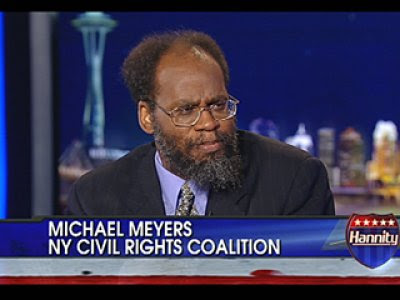 So why would the NAACP market such a lie?

They're scared of even more blacks and Hispanics joining the Tea Party. Better to label them racists and hope that some folks are scared away.

The only thing even remotely racist about the Tea Party is the NAACP's bogus assertion.

To top things off, the NAACP has been reduced to the traditional Jackson-Sharpton modality of corporate shakedowns.

NAACP President Benjamin Jealous also released a letter to BP chief executive Tony Hayward, asking to meet with company officials to discuss his "outrage" that minority contractors are apparently being left out in the cleanup of the Gulf of Mexico oil spill.

Today's NAACP is an anachronism and a laughingstock -- not necessarily in that order.

• Tea Party Express Spokesman: 'Send The NAACP to the Trash Heap of History Where They Belong With The Other Vile Racist Groups'
• Ron Miller -- From Justice to Joke
• Black Sphere -- the NAACP is Racist.
• NAACP to vote Tuesday on resolution decrying racism of Tea Party; also vows to emulate Tea Party to achieve success

Conservatives are all on the same wave-length today. I just posted video clips of Samir Shabazz (NBP party -- who calls for violence against whites) and Katrina Pierson (an African American founder of the Dallas Tea Party movement).

And I wondered whether the NAACP would denounce the "racist elements" of the New Black Panther Party as eagerly and forcefully as it has demanded the same of the Tea Party movement.

So, one week the left defends Byrd's long involvement with the KKK and the next they defend the statements made by the NBPP and the NAACP? And it's the TEA Partiers who are racist...riiiiight. I hope all those idiots who thought Obama was going to be the "Great Unifier" are happy.

I hereby offer my personal resolution of condemnation of the racist elements of the NAACP.

This condemnation carries as much weight as the NAACP's.

The American people have been awakened by the reality of voting for vague promises of "Hope" and "Change". Those who didn't listen to the warnings of what would come remember those warnings and are listening now.

(Dare to) take away all the rhetoric and tip-toeing-around-the-the facts and what this ultimately shows is pure, classic, new age American negro, unfettered, in toto, in full "bloom".

Why no one other than myself dares to admit this is worse than the manifestations themselves.

Dare to admit the truth. Living a lie, embracing out of fear or political correctness (the vicious liberal cudgel) is to embrace the paucity of truth which at least to myself is not just a stranger, but as well an outright enemy which I strike down at every turn.

Wake up America to what is right before your eyes.

The Tea Bag Party are just “haters not debaters” or as others have dubbed them “screamers not dreamers”, with their failed attempts at stopping Healthcare reform, they say they respect the Constitution, the Bill of Rights and the Declaration of Independence but they do not mind passing laws, through weak Governors (no one voted for this crazy) who only cares about getting elected Governor, on the backs of undocumented workers, and this law will not pass Constitution muster. I love the way our President of the United States, side set the trap, and stilled filed a lawsuit against Arizona, too sweet (what Arizona no “Plan B”?).

6. Could she be behind the Mural in Prescott, Arizona, ordered to be whiten,
7. On deck to pass, no citizenship to babies born to undocumented workers,

8. If she can read she should look up Arizona’s House Bill 2779 from two years ago (which was un-constitution and failed when legally challenged),
9. The boycotted Martin Luther King Day, what idiots don’t want another holiday? Yes, you guessed it Arizona.

Well Arizona, you can boycott new holidays and keep passing crazy laws and the rest of us will continue to challenged them in a court of law and continue to add cities to our Boycott of your state.

I real cannot believe anything that comes out of Brewer’s mouth, in an interview she first said her father had died in Germany fighting the Nazi in World War II (war ended 1945) but of course we find out the truth that father was never in Germany and died in California in 1955. But we are suppose to believe everything else she says, right! No one voted for you for Governor, yet you keep listening to the tiny brains of the crazies and signing into law everything that comes into their feeble minds, it only make you look dumb, stupid or racist, or maybe all three.

As for the Tea Bag Party, their phony patriotism is sickening; they are just racists going by another name. We all know you are just itching to put a sheet on their head? Let’s face it the Republicans had eight years to deal with health care, immigration, energy (remember Cheney’s secret meetings with oil companies where loosening regulation and oversight were sealed), climate change and financial oversight and governance and they failed. It appears that the Republican Party is only good at starting wars (two in eight years, with fat contracts to friends of Cheney/Bush) but not at winning wars as seen by the continuing line of body bags that keep coming home. The Republicans party will continue turned inward to their old fashion obstructionist party (and their Confederacy appreciation roots) because they continue to allow a small portions (but very loud portion) of their party of “birthers, baggers and blowhards” to rule their party. I will admit that this fringe is very good at playing “Follow the Leader” by listening to their dullard leaders, Beck, Hedgecock, Hannity, O’Reilly, Rush, Savage, Sarah Bailin, Orly Taitz, Victoria Jackson, Michele Bachmann and the rest of the Blowhards and acting as ill programmed robots (they have already acted against doctors that perform abortions). Yee Haw!

I want to take this opportunity to thank the Tea Party for electing Massachusetts Republican Scott Brown since he voted for the Financial Reform Bill and help the President of the United States with another legislative victory, thank you Tea Party.

The problem is this. Tea Party candidates will win a number of these congressional races because local districts are often safely partisan in nature. They can make their wild, unfounded claims, crazy accusations, etc., and win. That means not only are we likely to see an increase in Republican seats in both houses, we're likely to see more antics, more insanity, more stupidity. At the same time they're going to do everything they can to derail Obama's policies which will likely mean high unemployment, a moribund economy, and more compromises on policy positions that make no one happy.

That could literally mean that if the Republicans put up a legitimate candidate in 2012, they could win. Such a result is bad enough, but the likely response for the Democrats is to move further to the "middle" to placate voters. As we've seen over the last decade, the "middle" in American politics is basically on the verge of being an 80s Republican. Increasingly that means we'll have a political landscape of a conservative party and ratfuck insane parties. The former, given it's track record, slowly moving to the right, the latter, given it's track record, loudly screaming "socialism, communism, fascism!!!"

If we continue on this course, privatization will be socialism.