Now that Bell's $800,000 City Manager has resigned, perhaps San Francisco can examine its 10,000 or so six-figure city workers

Bell is one of the poorest cities in Los Angeles County and was paying its city manager around $800,000 annually. And that was just the start of the abuse.

A defiant Bell City Council defended the hefty compensation awarded to City Manager Robert Rizzo and two other officials just hours after the three agreed to resign amid a public outcry.

In the city's first formal statement on the salary issue, Bell released a letter from Mayor Oscar Hernandez in which he praised Rizzo's service to the city and said his nearly $800,000 annual salary was justified. 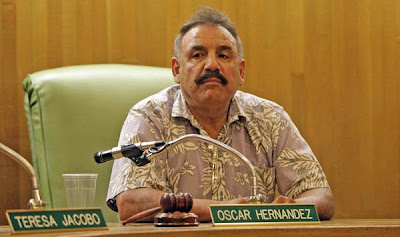 ...The decision was announced at midnight to a crowd of angry Bell residents that had been waiting anxiously since 4:30 p.m. when the City Council began its meeting. None of the administrators attended the session. The crowd erupted in applause after the announcement but immediately yelled out questions about what would happen to the council members. Four of the five are paid close to $100,000 annually. When residents' questions were not answered, they shouted, "Recall!"

What other local governments have abused the taxpayer in California? Remember that there are at least 350,000 members of the massive public sector union -- the SEIU -- alone.

Perhaps taxpayers in San Francisco could take this opportunity to examine the salaries of their city workers. In 2007, 8,000 city employees were making six figures or more. Now that number is close to 10,000, despite the meltdown of the private sector economy. 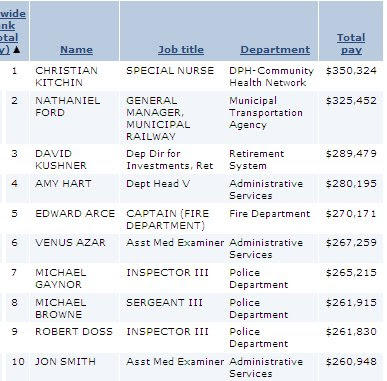 Now the situation is even more outrageous. 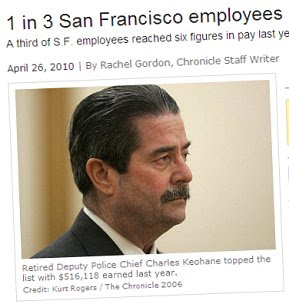 Leading 2009's ...Club was the Police Department's Charles Keohane, a deputy chief who retired midyear... His total payout was $516,118, city records show, the bulk of which came from cashing out stored-up vacation, sick days and comp time...

The average city worker salary in San Francisco is $93,000 before benefits, according to Deputy City Controller Monique Zmuda. The data take into account everyone from park gardeners and street cleaners to attorneys and technology specialists.

...In years past, the $100,000 Club included large numbers of Muni operators, transit supervisors, firefighters, police officers and sheriff's deputies who padded their paychecks with hundreds of hours of overtime, paid out at a rate of time-and-a-half.

San Francisco's budget deficit is roughly half a billion dollars and idiocy like uncontrolled salaries and benefits are a central reason.

Given the unmitigated economic ruin brought about by California's unholy union of Democrat government hacks and public sector unions, a painful reckoning is all but inevitable.

I read somewhere that this guy Rizzo will get a $650K a year pension.