Thank heavens Barack Obama isn't a cop in Arizona -- he could have gotten in big trouble today with one of the ethnic front groups.

President Obama waded into the national race debate in an unlikely setting and with an unusual choice of words: telling daytime talk show hosts that African-Americans are “sort of a mongrel people.” 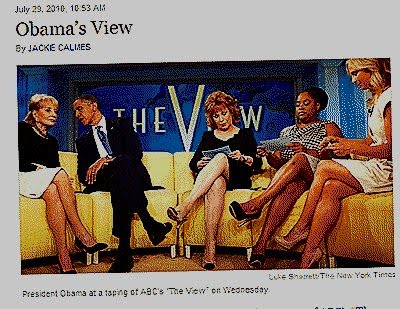 The president appeared on ABC’s morning talk show “The View” Thursday, where he talked about the forced resignation of Agriculture Department official Shirley Sherrod, his experience with race and his roots...

Obama said of African-Americans: "We are sort of a mongrel people."

"I mean we're all kinds of mixed up," Obama said. "That's actually true of white people as well, but we just know more about it."

And to think that this unfortunate situation could have been avoided: there's a teleprompter app for the iPhone.

Meanwhile, on Long Island, Democrat Congressman Mike McMahon is steamed over the amount of money his GOP challenger has raised.

Mike Grimm, a G.O.P challenger for Mike McMahon's Congressional seat, took in over $200,000 in his last filing. 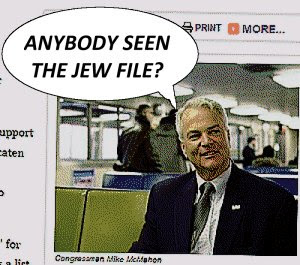 But in an effort to show that Grimm lacks support among voters in the district, which covers Staten Island and parts of Brooklyn, the McMahon campaign compiled a list of Jewish donors to Grimm and provided it to The Politicker.

The file, labeled "Grimm Jewish Money Q2," for the second quarter fundraising period, shows a list of over 80 names, a half-dozen of which in fact do hail from Staten Island, and a handful of others that list Brooklyn as home...

"Where is Grimm's money coming from," said Jennifer Nelson, McMahon's campaign spokeman. "There is a lot of Jewish money, a lot of money from people in Florida and Manhattan, retirees."

And be sure not to miss our feature story at 11pm, when Oliver Stone and Helen Thomas mudwrestle for the chance to face off against Hillary Clinton in the finals next week.

Speaking of exploding Progs head, though I'm not Jewish I just donated to Mike Grimm's campaign via Sarah Palin's endorsement.

What will the Progs do about that!

Can it get more pathetic?

How about Napolitano wanting to offer Amnesty behind the back of Congress?

How about NASA being turned into a social welcome wagon for the Muslim Community around the Globe?

How about having Billy Clinton making bribes to Mr. Sestak on behalf of Sen. Specter?

How much insanity can we encounter?

This is the same Democratic President who lied about transparency, earmarks, signing statements, executive orders, GITMO, Iraq, etc., who said Police "acted stupidly" and made fun of the Special Olympics.

The DNC Titanic continues to sink all.

Hey, Doug! I could have sworn that Mike McMahon pic was a Drew Friedman original, lol! Then I saw the image embedded in the original report linked. Near identical. If it was an accident, it was brilliant one. If a tribute, also great.

If you have absolutely no clue who I'm talking about (and shame on you if you don't), check out this link, then check out the McMahon image again. Good stuff, mate! I thought it was the Master himself.

The Master. FYI. Save you the trip :)