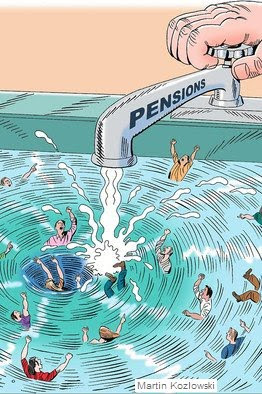 • Illinois let $5 billion of bills go unpaid.
• Minnesota is delaying corporate and sales-tax refunds, postponing school and medical aid and setting up a $600 million bank line of credit.
• New Jersey is planning to refinance about $250 million of general-obligation bonds to push $202.5 million of debt-service costs into future fiscal years.
• Illinois, is selling $900 million of bonds for capital projects this week.
• 22 states put staff on temporary leave.
• Arizona sold its House of Representatives and Senate buildings.
• California solicited bids for 11 of its office complexes.
• Delaware saved $29,000 by eliminating flowers at the state psychiatric hospital and health department.
• California Governor Arnold Schwarzenegger, facing a $19 billion budget deficit for the year that began this month, is trying to force 200,000 state workers onto minimum wages temporarily.

All of those half-assed measures assume the economy is going to get better later this year. Instead I suggest states should expect a Second-Half Housing and Durable Goods Crash.

California alone is $19 billion in the hole and that is after California enacted a temporary 1 percentage point increase in the sales tax rate (expected to generate about $4.5 billion in fiscal 2010) and after it accelerated income tax collection.
It is also after patching a $24 billion hole earlier in the year.

Literally no state is remotely prepared for the second-half tsunami coming down the pike.