Behold: the Awesomeness of the Obama Recovery as Explained by Journolist Members, Apparently

You've got to love the desperate, wheezing hacks in the media who are still pitching an economic recovery to a disbelieving electorate. Please consider "A Surprise Upswing in the Housing Market."

After weeks of disappointing housing reports from the government and realtors, new data released Monday could offer some hope for a stalled market.

The annual rate of new home sales climbed in June to 330,000 units, up 23.6% from May. The rate was well above the 295,000 units a year that economists polled by Briefing.com had expected.

New home sales are still down 16.7% from June 2009, but last month's surprising data suggest the housing market may have a life even without the homebuyer's tax credit, which expired for most potential buyers at the end of April...

Mish and David Rosenberg expose the reality of these desperate numbers.

One can't help but laugh at headlines touting a huge 23.% jump in new home sales given that the "jump" was to the second worst month in history, dating back to 1963.

Dave Rosenberg puts the headline jump into perspective in Housing Data Are Not Supportive.

Market sentiment is positive and as a result of the market going straight up, people believe that the economic data are somehow getting better. Not the case at all. 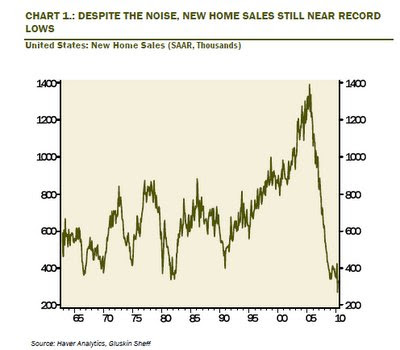 April new home sales were revised DOWN to a 422k annual rate from 504k when the data for the month were first released. You know what that means? It means that the homebuyer tax credit was even a bigger dud than we thought it was previously. No bang for the buck from these spending gimmicks.

At 330k in June, this goes down as the second worst month on record (data back to January 1963). And in per capita terms it is far worse than that considering the population has expanded 63% since then... [And] the average sales price was cut 9.8% MoM in the third steepest month ever in terms of discounting. At $242,900 for an average price of a new home sold, this represented the lowest number since October 2003 and off 26% from the 2007 peak.

But just think about that for a second. The third largest price cut in history managed to generate the second worst new home sales tally on record. This is something to get excited about?

Given that housing leads recoveries (more specifically housing starts followed by new home sales), this is another nail in the coffin that suggests there has been no recovery except in financial assets. Moreover, that financial recovery is only a result of unsustainable stimulus that is now quickly fading into the sunset.

And Mish, I would keep your head on a swivel and stay away from plate-glass windows. The pencil-necked weasel named Spencer Ackerman is a lot more terrifying in person than you could possibly imagine.

YOu think future econimist will name that sharp drop aroun '05-'06 at the "Rich-Dodd Drop"?

Got to do spellcheck....