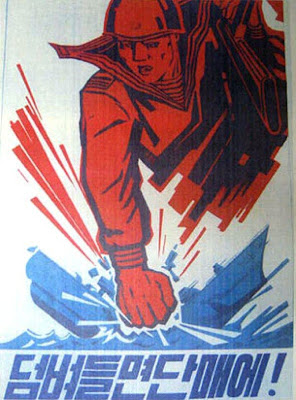 North Korea now appears to be gloating over its sinking of the South Korean warship, the Cheonan, according to Radio Free Asia (via Gawker).

The poster, reads, “We will smash you with a single blow if you attack!”.

Photographed by a Chinese businessman visiting North Korea, the poster may be from a previously conflict, but is nevertheless being circulated in the country now...

The split of the boat is similar to how the Cheonan was destroyed, according to a military analyst speaking to Radio Free Asia.

at 4:08 PM
Email ThisBlogThis!Share to TwitterShare to FacebookShare to Pinterest
Labels: extremism, War