WaPo Ombudsman Explains Non-Coverage of PantherGate: We Were Really Quite Busy, What With the Macaca Fallout and All

For months, readers have contacted the ombudsman wondering why The Post hasn't been covering the case. The calls increased recently after competitors such as the New York Times and the Associated Press wrote stories. Fox News and right-wing bloggers have been pumping the story. Liberal bloggers have countered, accusing them of trying to manufacture a scandal.

...National Editor Kevin Merida, who termed the controversy "significant," said he wished The Post had written about it sooner. The delay was a result of limited staffing and a heavy volume of other news on the Justice Department beat, he said.

In related news, the Post did manage to print the word macacca 96 times within a one month period. 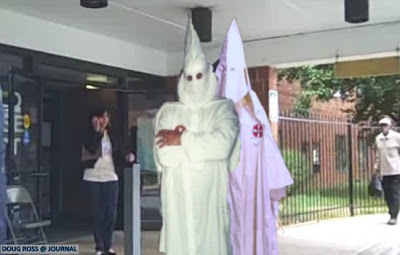 Try to imagine the Post ignoring a story about, say, John Ashcroft killing a case involving whites who intimidated blacks with weapons and racial epithets at a polling place.

The Post's agenda is crystal clear. Its purpose is not the pursuit of objective reporting. Its ideology trumps the truth -- and its purpose is to mislead.

Businesses must sell and make a profit to stay in business. The Post is so dedicated to its cause, however, that it will still be manufacturing lies when the last customer exits stage left.

The act of committing fiscal suicide -- wearing ideological blinders as real news stories occur, unreported, around them -- is proof that liberalism is a mental disorder.

Perhaps if the Post ventured into reporting the news accurately, its staffing might not be quite so limited.