In his bestselling business book Good to Great, author Jim Collins distilled tens of thousands of hours of research in order to reveal a few basic characteristics that distinguish great companies from merely good ones.

How, for example, did Walgreens outperform the market by a factor of fifteen times, while its competitor Eckerd became an industry laggard? How did Kimberly-Clark meet and defeat P&G's master marketers? And how could Nucor take on US Steel? Simple: each exhibited certain traits in its leadership that allowed it to prevail.

Leadership is certainly the most important attribute of a "great" organization. And Collins defines a set of criteria called "Level Five Leadership" -- the key characteristics of a chief executive that allow a company to perform at the very highest level.

How does President Obama measure up to Collins' definition of Level Five Leadership? Answering this question might help us understand the nature and impact of Obama's tenure as commander-in-chief.

How does Collins define a Level Five Leader -- and how does Obama measure up?

1) Drive for sustained results: The difference between the Level 5 and other leaders is that they are driven to produce sustainable results for their organizations. The idea is that level five leaders create long term sustainable change.

The change that Obama seeks is anything but sustainable. Current entitlement programs like Medicare and Social Security are trillions in the hole. Obama's own deficit commission called the entitlements and related deficits "a cancer" that would eat away our society from within.

Rather than addressing sustainable reform, Obama chose instead to engage in the most egregious accounting skulduggery even seen in Washington, which he used to make the claim that "health care reform" would reduce the budget deficit. Anyone smarter than Rosie O'Donnell -- which is, by my estimation, roughly 99.3% of the population -- realizes that adding 47 million new bodies to the rolls of the insured could never result in lower costs. Further, the Democrats' numerical shenanigans included using six years of spending against ten years of revenue.

No, the change Obama seeks is anything but sustainable. The Congressional Budget Office has warned for years that the current spending trajectory is -- precisely the opposite -- and, in their words, "unsustainable". So the President utterly fails on this count.

2) Set up successors for success: Level 5 leaders are generally more interested in the success of the organization than there own personal success. They want to leave a lasting legacy of an organization that continues to prosper. They are self confident enough to hire competent people (get the right people on the bus) and then delegate.

Obama has surrounded himself with people of minimal real world accomplishment. The American Enterprise Institute examined the backgrounds of cabinet members starting with Teddy Roosevelt and discovered "the makeup of the current cabinet—over 90 percent of its prior experience was in the public sector—is remarkable."

Furthermore, Obama's advisers and "czars" were picked for ideological purity -- not accomplishment. The Maoist Anita Dunn, "9/11 Truther" Van Jones, Ken Salazar, self-acknowledged socialist Carol Browner, and the political crony Eric Holder were chosen not based upon competence, but because they fervently belief in the Statist philosophy that "government knows best". And they persist in this belief system even though history, facts, logic and reason offer compelling evidence otherwise.

3) Modesty: Should demonstrate compelling humility. They act with quite, calm determination; and rely on inspired standards, not inspiring charisma, to motivate.

Even his most ardent supporters would admit that Obama is baldly immodest. Author Charles Krauthammer wrote earlier this month that Obama's vanity has reached heights never before seen in American politics.

It began with the almost comical self-inflation of his presidential campaign, from the still inexplicable mass rally in Berlin in front of a Prussian victory column to the Greek columns framing him at the Democratic convention. And it carried into his presidency, from his posture of philosopher-king adjudicating between America’s sins and the world’s to his speeches marked by a spectacularly promiscuous use of the first-person pronoun “I.”

...It’s a stylistic detail, but quite revealing of Obama’s exalted view of himself. Not surprising, perhaps, in a man whose major achievement before acceding to the presidency was writing two biographies — both about himself.

In fact, the only time Barack Obama expresses humility is when describing his country to foreigners.

4) Take responsibility: Level 5 leaders stand out because they take responsibility when things go wrong. They do not look to blame others when things do not work out as expected. In addition, they rarely seek to take credit for things that go right, generally seeking to attribute the success to other factors.

Blaming others is the singular, constant theme of the Obama White House. When it comes to the economic meltdown, "the previous administration" is the favored scapegoat. Health insurers, doctors and nurses, Fox News, banks, oil companies, the 'rich' and every other segment of the private sector are used to divide Americans into racial, religious or economic combatants.

These are Alinsky's tactics of dividing the world into angels and demons; they demonstrate anything but a healthy ability to take personal responsibility.

5) Organization focus: The ambition of the Level 5 leader is first and foremost on the organization. Their desire for success for the organization that they lead far outweighs their drive for personal rewards.

Obama's focus is on himself -- first, last and always. The infamous video "I will not rest" (produced by RightScoop) depicts Obama's repeated claims that he "will not rest" until [fill in the blank with the oil spill cleanup, unemployment, health care reform, etc.] while vacationing, golfing, partying and otherwise living like a French Monarch circa the 17th century. 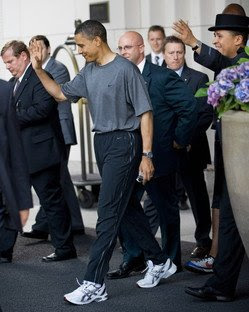 Perhaps the most iconic instance of Obama's personal selfishness came amidst the presidential campaign in 2008. During the same trip to Germany that included the bizarre "Ich Bin Ein Obama" speech in Berlin, Obama "cancelled plans to visit two U.S. military bases while in Germany, ...despite having all kinds of time to speak to gushing Berliners as well as getting in a workout at the Ritz Carlton. ...One of the bases, The Landstuhl Regional Medical Center, 'is an overseas military hospital operated by the U.S. Army and the Department of Defense...[that] serves as the nearest treatment center for wounded soldiers coming from Iraq and Afghanistan.'"

Obama's drive is solely for personal rewards -- his new laws, his accomplishments, his legacy. As for the United States? The private sector, to be sure, comes in at a very distant third or fourth.

Unfortunately for all of us, Collins' definition would seem to indicate that our nation's chief executive is a "Level Zero Leader". The only open question is the amount of damage he will inflict upon the economic and cultural fabric tying us together -- and whether this damage can be undone.

His Presidency is certainly historic, just not for the reason his acolytes once believed.


I'll refrain from noting that Obama's next book should be titled Good to God Awful.

at 4:05 PM
Email ThisBlogThis!Share to TwitterShare to FacebookShare to Pinterest
Labels: Democrats, Obama


Interesting reading, but it sort of approaches Obama as a flawed and pompous, incompetent leader. But trying to lead.


It is just too unlikely that anyone can so consistently do the wrong thing unintentionally, without malice. If he were simply incompetent, he'd be Jimmy Carter on steroids incompetent. Added to what little we know of his past, his associations, and his beliefs, it isn't a failure of leadership.


He is succeeding fairly well in his real goal, the destruction of the United States as a Constitutional Republic, a representative indirect democracy where the government has the consent of the governed and the law is above all men, and a destruction of the free market system into either an original Maoist/Marxist system or the current crony capitalism in China that still claims the title of communism. Part of his animus towards average Americans seems racial, and whether he wrote it himself or had Bill Ayers as a ghost writer, his teenage crisis of identity, and its resolution, a rejection of all things White, including his White tranzi relatives, it explains the malice.


Now, whether he is the actual head of the conspiracy to destroy America, or a tool of some foreign government, former domestic terrorists, or wealthy and amoral haters of America, that is harder to answer.

BUt I reject the basic premise of simple incompetency.

Obamas "I shall not rest until..." lines are a paraphrase of Clinton's favorite phrase "I've worked hard on this, harder than I've worked on anything in my..."