When a relatively affluent town like Annapolis, Maryland begins suffering from wave after wave of homelessness, you know the Democrats' "trickle-up economics" program is working to perfection. 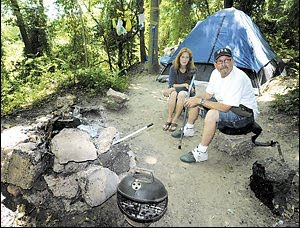 In Annapolis, less than half a mile from the State House and Governor's Mansion, a colony of homeless people live under the College Creek Bridge on Rowe Boulevard. On Friday, no one was there when a reporter and photographer visited, but clothing, chairs and drying laundry showed the site to be home to at least two groups of people.

Figures provided by the county Department of Social Services show that homelessness is indeed on the rise. In 2009, the department recorded more than 1,000 homeless adults, compared with 550 two years earlier. The number of homeless children jumped from 429 in 2007 to 960 last year, figures show.

"We are seeing an increase, mostly in the area of homeless adults, because people are losing their jobs and their homes," said Marci Kennai, county director of social services. 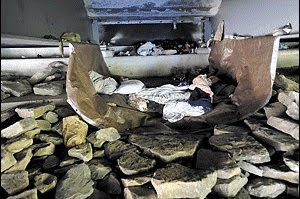 ...Zerhusen founded HOPE in 2004 .. Last year, the charity helped 83 families. This year, volunteers have assisted nearly 100 - and the year's only half over... "A lot of what's happening is because of the economy," Zerhusen said.

Other charities are experiencing the same crushing need... The Rev. Ed Jansen, director of the Emmaus Center in Glen Burnie, said he is "absolutely swamped" with people in need. The center, which he opened with his wife in 2008, serves breakfast and lunch to homeless people and also provides counseling services. Jansen estimates that he serves about 1,200 meals a month.

Obama's wealth redistribution model -- "trickle-up economics" -- makes about as much sense as teaching trigonometry to reindeer.

So -- you feel stimulated yet?

How can this be? In the past, the election of a Democratic president instantly removed any media reports on the homeless. Of course they reappeared when a Republican got elected.

Ha! How true that is...and pathetic.