City and County Government Associations: Obama Economy Will Create or Save, Eh, I Mean Destroy or Eliminate 500,000 Public Sector Jobs

A report by a consortium consisting of the National League of Cities, the U.S. Conference of Mayors and the National Association of Counties doesn't beat around the bush. It's title: "Local Governments Cutting Jobs and Services: Job losses projected to approach 500,000". 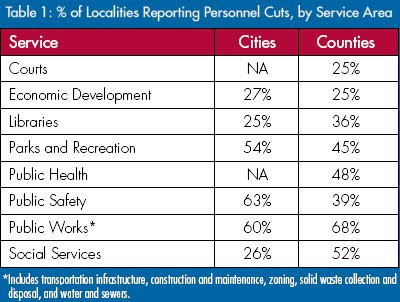 ...In May and June of 2010 NLC, NACo and USCM conducted a survey of cities and counties across the country for the purpose of gauging the extent of job losses. The survey was emailed and faxed to all cities over 25,000 in population and to all counties over 100,000 in population. The survey results presented below are based on 270 responses, 214 responses from cities and 56 responses from counties.

After lamenting the awful state of the economy, the Democrat-dominated organizations recommend -- you'll never guess -- more federal bailouts. Yes, even after the hundreds of billions in "Stimulus" dough that stole money directly from red states and deposited it into the coffers of blue states, a model that represents obvious fiscal suicide.

To secure economic recovery, Congress and the Administration must act now to create jobs quickly and help stabilize local government economies. An immediate opportunity exists in the Local Jobs for America Act (H.R. 4812/S. 3500), which would provide $75 billion in targeted and temporary fiscal assistance over two years to local governments and community based organizations to save and create local jobs. Other opportunities include investing in infrastructure through targeted spending to local governments and ensuring that small businesses and local governments can obtain access to credit. Federal investment that helps save local jobs and preserve local services will help stabilize communities across the country and ensure that all of America’s families are able to participate in the economic recovery. 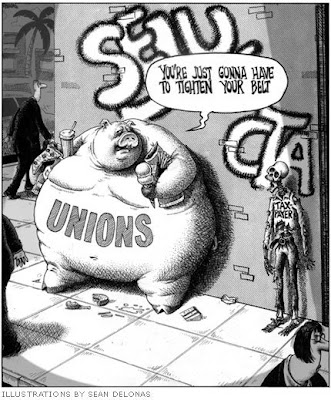 Candy-gram, Mr. and Mrs. Mayor: the federal government is broke. Democrats stole all of the money and then some. We're letting our kids, grandchildren and great-grandchildren enter the world decades from now owing the principal and interest on Joe Schmoe's 99-week unemployment extensions.

99-weeks of unemployment isn't a safety net. It's welfare.

At some point soon, the public sector union membership will come to the uncomfortable realization that the bosses and their sycophants in the Democrat Party sold them down the river.

While John Kerry enjoys his wine selection on the Isabel and Andy Stern puffs on his massive Cuban cigars, the hard-working cops, teachers, firefighters and emergency personnel will be suffering. And they can thank the unholy marriage of incompetent Democrat politicians and greedy public sector union bosses who have conspired to defraud the taxpayer.