Still waiting for President Obama to condemn the violent rhetoric coming from the union bosses and Organizing for America. 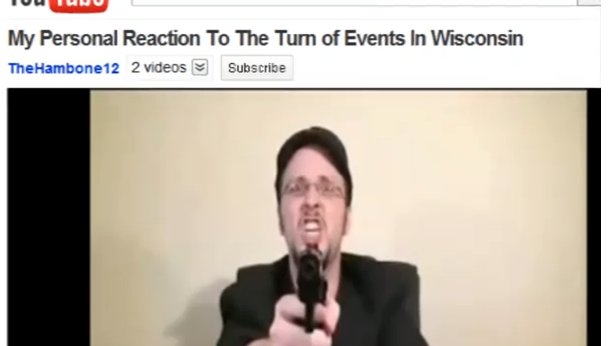 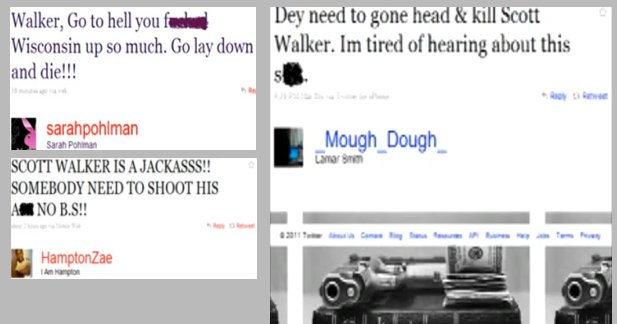 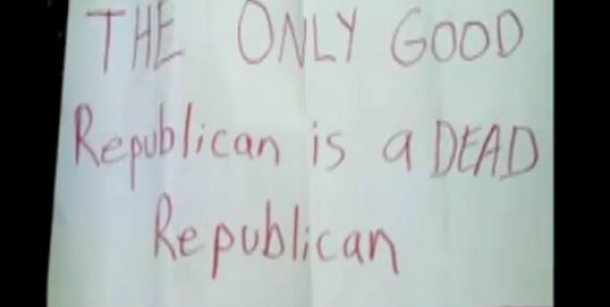 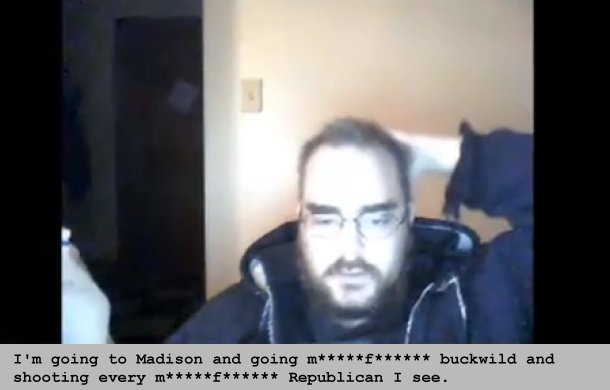 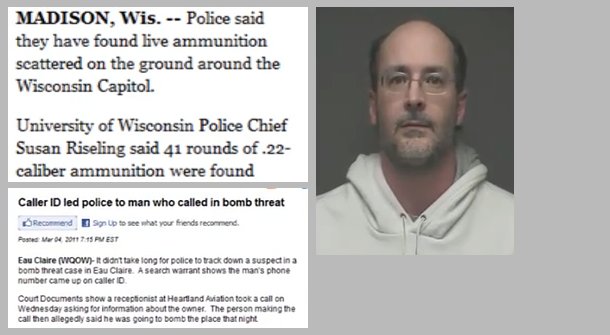 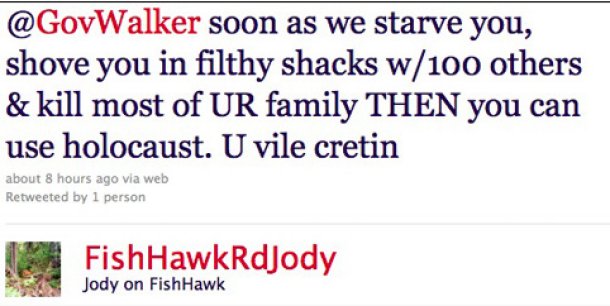 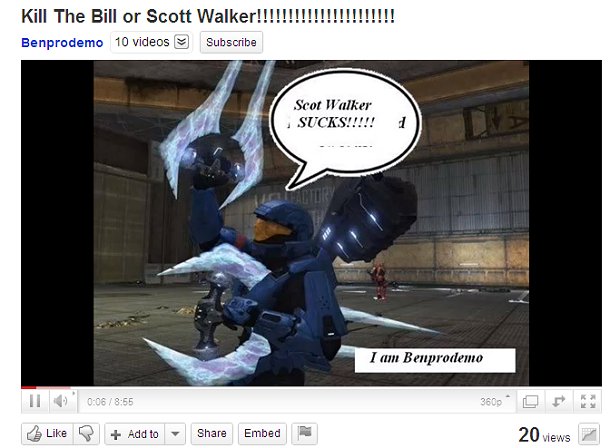 And don't hold your breath waiting for legacy media to cover this despicable behavior.

at 11:46 AM
Email ThisBlogThis!Share to TwitterShare to FacebookShare to Pinterest
Labels: Crime, Democrats, MSM, Obama, Unions

That first clip seems to be someone taking an internet reviewer (The Nostalgia Critic)s reaction to something that causes him to flip out and shoot a gun randomly. Normally used to indicate they find something frustratingly dumb, not that the person behind it needs killed. To call that a death threat is to say that every time an annoying fan of NC posts that clip they're threatening death on others, such as producers remaking a movie or someone who does something stupid in the news. Otherwise, I agree. You won't see those in the media and the majority of people need to work on anger issues and should look into growing up to realize that everyone who disagrees with you should not be injured in any way.

Call me back when you have lists of deadly incidents like this:

Terrorism directed at 'liberal' and 'government' targets since July 2008

Oh yeah, and here's this:


"I tell people don’t kill all the liberals, leave enough around so we can have two on every campus; living fossils, so we will never forget what these people stood for."

I notice how this Andrew provides a link to say that these were all 'right wingers' that are targeted on this link he shows.

Von Brunn was a registered Democrat.

White supremists are also Marxists and Nazis. The term "National SOCIALISM" mean anything to you, Andrew?

Loughner was a nut that read the Communist Manifesto and Mein Kampf, he also liked MEN, not a conservative by ANY stretch of the imagination;
Like most leftists, he hated Israel, which is the REAL reason he shot Giffords, she was a Zionist, which leftists hate.

He seems to have left out "Omar" the murderer in MA who was a fake victim of white racism.
He murdered 9 people.

He also leaves out how black on white crimes are WAY up since the emboldening of them by the liberal Black Panthers who want to 'kill all crackers & white babies'.

Joe Stack was also a leftist/anarchist.
NOT a conservative.

All of these links you provided do not point to 'right wing, conservative' extremism.

Might you be reminded of how your friends are violent, threatening, vandalizing the capital in WI, started race-riots and murders in the 1960's?

You have a short memory, Andrew.

You also still dont see that the Conservatives ARE the underdog and NOT in power, whereas, the left IS in power and drunk WITH power.
Shame on you.

Sorry Andrew. Using such incidents as the Jared Lee Loughner shootings to attempt (apparently*) to smear those who Mr. Eric Holder would not call "my people" is weak AT BEST. Any troll worth his salt could do much, much better.

And, let me get this straight - you're mad at Rush Limbaugh for telling people to NOT kill Liberals?

You don't have any defense for this behavior because it is indefensible. You had an opportunity to denounce it, and you chose not to. That makes you, personally, evil.

*because it's really not clear what you're trying to do here - perhaps tie random acts of violence to one political party? Newsflash - the Liberal media already tried that. They failed. And do you really want to excuse death threats from otherwise** sane people because there are crazy people in the world?

**other than being "progressive," of course.

Unbelievable that some people feel that these topics are explainable or even justified. Has the left always been this evil, and it's just coming to light, or is it just the emboldenment since barry took office? I tend to believe the latter.

Mean while at the Bullying Summit...

Did anyone stand up when obama was called hitler? or how about in the past weeks, when a voter asked a republican senator who and when will that take obama out...

Doug, you're linked at Big Government too:
http://biggovernment.com/jjmnolte/2011/03/17/20-days-of-left-wing-thuggery-in-wisconsin-when-will-obama-democrats-and-msm-call-for-civility/

Those are not "true" threats. "True" threats are imminent. But, speaking of things you'll never see in legacy media.
http://www.killercop.com/Pages/pdfs/SelectiveProsecutionMotion.pdf

Hall of Fame Roundup for ...

J.A.U.L. (pronounced “jowl”): Just Another Unhinged Leftie.
d(^_^)b
http://libertyatstake.blogspot.com/
"Because the Only Good Progressive is a Failed Progressive"

Andrew, you lost all credibility when you linked an article to a very left wing website that is nothing more than a site to spread their lies. It is what the unions and democrats use to use people like you.

MJ, don't worry about what Andrew says. He is nothing but a tool, obviously anybody who reads anything from media matters that has been proven biased and lies, is a person who hates facts. They cannot stand what they have become or have no regard who they have become. They are entitled people that are leeches of society. They have no use for facts because if they did they would have to own up to a lot of crap they do. And we all know liberals hate accountability.