Tyler Durden at Zero Hedge is doing some of the best news aggregation related to the tragic aftermath of the Japanese quake, tsunami and nuclear disasters.

An animated fallout tracker illustrates a possible shift in the winds that could send plumes of radioactive material -- the actual amount is debatable -- into Tokyo itself*.

Hmm. Do you know who this man is? 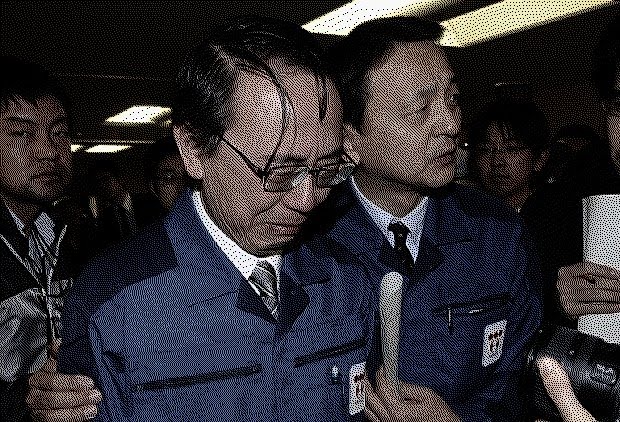 This picture comes to us courtesy of The London Daily Mail, which captions it "The moment nuclear plant chief WEPT as Japanese finally admit that radiation leak is serious enough to kill people."

The boss of the company behind the devastated Japanese nuclear reactor today broke down in tears - as his country finally acknowledged the radiation spewing from the over-heating reactors and fuel rods was enough to kill some citizens... Japan's Nuclear and Industrial Safety Agency admitted that the disaster was a level 5, which is classified as a crisis causing 'several radiation deaths' by the UN International Atomic Energy.

Officials said the rating was raised after they realised the full extent of the radiation leaking from the plant. They also said that 3 per cent of the fuel in three of the reactors at the Fukushima plant had been severely damaged, suggesting those reactor cores have partially melted down.

After Tokyo Electric Power Company Managing Director Akio Komiri cried as he left a conference to brief journalists on the situation at Fukushima, a senior Japanese minister also admitted that the country was overwhelmed by the scale of the tsunami and nuclear crisis... Deputy director general of the NISA, Hideohiko Nishiyama, also admitted that they do not know if the reactors are coming under control.

Pray for the people of Japan.


Linked by: Michelle Malkin. Thanks!.

I will be and have been praying for Japan.