"I never want to hear about 'The Pet Goat' again"

Fritzworth at AoS wins the headline o' the day in a landslide: "The world is going to hell in a handbasket, and Obama tapes himself picking his NCAA bracket..."

Dangerous levels of radiation leaking from a crippled nuclear plant forced Japan to order 140,000 people to seal themselves indoors Tuesday after an explosion and a fire dramatically escalated the crisis spawned ... by Friday’s 9.0-magnitude earthquake and the ensuing tsunami that is believed to have killed more than 10,000 people, plunged millions into misery and pummeled the world’s third-largest economy.

Via Mike Allen’s newsletter, we see in the first line how the leader of the free world will spend his day during this awful crisis:

President Obama is taping his NCAA picks today, and they’ll be revealed tomorrow on ESPN. 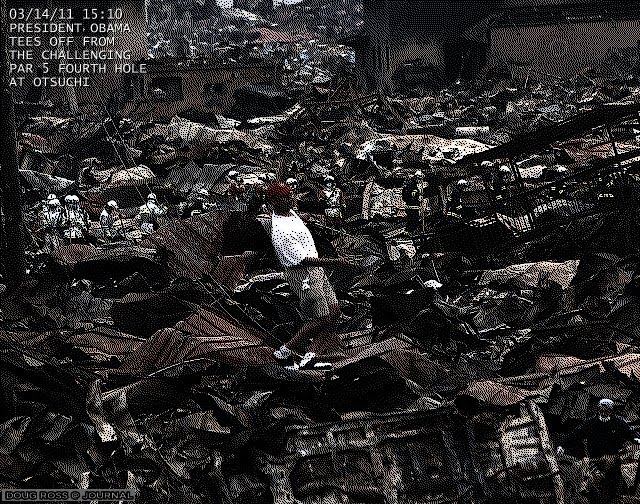 [And of] course he’s taking an easy schedule today; he was working hard last night:

President Obama makes his first major fund-raising pitch for his 2012 re-election on Monday night when he meets with about 50 backers—some involved in his 2008 campaign and others who are considered potential major supporters.

After this, any liberal nutjob who mentions The Pet Goat is going to deserve the metaphorical beat-down they receive.

It is a great image, which painfully smacks of reality. Another Ross work of art.

But this is exactly what all Democrat Partisans do...

Remember when there was genocide in Rwanda? The Clintons decided to lie about it, to pretend it did not exist. They also did the same with the alarming rise of the related Muslim Militancy - Terrorism: they irresponsibly ignored, hid, lied, etc.

They are doing the same on the budget, the problems with entitlements, the issues with energy, etc.

The corrupt Democratic Partisan machine could care less, only concerned about itself.

The world should learn - Americans should learn, if you are in trouble, don't look to the Democratic Party.

We watched this repeatedly as they slandered the Republicans and GW Bush who were leading after 9-11, who lead the world to free so many around the globe.

On another note, the reporting from ALL, has been awful on this issue in regards to Japan. The hyperbole is incredible. Even Hot Air today, was suggesting a new earthquake hit Japan's "West Coast". How could they mistake a quake just west of Tokyo as being on Japan's West Coast?

Even the offering above, suggests Japan "ordered" 140,000 to seal themselves inside - when the video reveals the PM "urged" many out of precautions to stay inside.

It just reminds one, as tragic and dangerous as it is, the way it is processed by all - is so over the top, it tends to distort.

Where are the WFBs who were reasoned enough, to remain cool enough, to make the right moves?

Here is a dose of reality for all regarding the hyperbole...

Not to be missed:
"At such a time, nothing could be more scandalous than the current campaign by much of the international press to spread panic over trivial emissions of radiological material from several disabled nuclear power stations.

Let us be clear. Compared to the real disaster at hand, the hypothetical threat from the nuclear stations is zero. The reactors in question were all shut down four days ago"

What is so bothersome, is seeing those on the conservative side play fool to the game. Are they really that lost when reactionary - hyperbole nonsense is peddled?

Why aren't they cooler to see the facts, or wait until some smoke clears?

Everytime, we see run and jump, as if they learned nothing after 2004, or even the "Delaware Disaster".

Didn't Miller teach anyone anything?