More Republican lawmakers in Wisconsin are receiving death threats for casting votes, though to read state-run media you'd never have an inkling.

For this kind of news, we turn to a local TV outlet, WQOW in Eau Claire, WI. 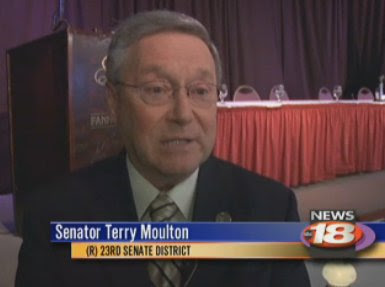 Lawmakers across the state have been under attack following the passage of Governor Walker's budget repair bill.

"I know I have received death threats in my office, and that's very disturbing, and we don't need that kind of activity in Wisconsin, and I think most of us are above that, and hopefully those kinds of things will stop," says Senator Terry Moulton (R-23rd Senate District).

Senator Moulton is hoping the state can be healed, and both republicans and democrats can come together to work on the state's upcoming budget. Sunday night, hear more from local lawmakers about how they think both parties can work together once again.

Last week Noel Sheppard at NewsBusters observed that ABC, CBS, MSNBC, NBC and NPR had all censored news of these death threats.

To give credit where credit is due, it appears only CNN has had the temerity to report the outrageous behavior of the Democrat Party, President Obama's community organizers and the public sector union bosses.

Which means there's probably an IRS investigation or three in their future.

Isn't it lovely to see the collapse of a civilization right in front of our eyes?