Watch this extraordinary speech by an Austrian MP. More evidence that, as I have said repeatedly, the Europeans will return to their anthropological roots and repel the Muslim tide threatening their way of life. In fact, with European heads of state declaring the “failure of multiculturalism,” it’s happening already. 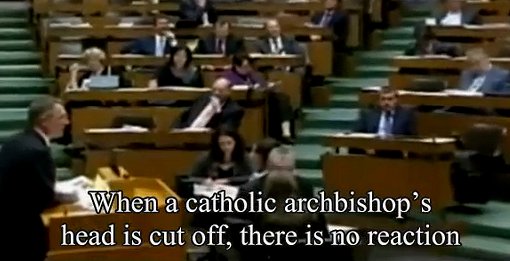 Oh, and speaking of which: Arab Terrorists Murder Family in Samaria, Including Infant.

I hate to say this, but he almost makes Allen West look like liberal.

"... More evidence that ... Europeans will return to their anthropological roots and repel the Muslim tide threatening their way of life. In fact, with European heads of state declaring the “failure of multiculturalism,” it’s happening already."
=============================

You miss the point about liberals.

They believe that "talking about" a problem is the same thing as "taking active steps to fix" the problem.

All that will come of this blather about "the failure of multiculturalism" by government after government will be more words, more posturing, and more words still. And, not incidentally, appeasement and more appeasement toward the "restive immigrant populations" of their respective countries.

The bloviating is just to persuade their ethnic-native citizens that these government leaders "feel their pain" regarding the skyrocketing crime levels caused by importing millions of hostile, unassimilable Muslim freeloaders into their formerly homogeneous European populations.

You will note that NONE of these "leaders" has any concrete plan to "force" assimilation, and there is no penalty for not assimilating.

As the saying goes "You can't un-ring the bell".

The foreigners are already there --in the bosom of Europe-- secure in their "no-go" enclaves; the hate-speech laws are on the books and are enforced; the liberal media demonize any criticism of "Islamic cultural practices" as being evidence of "the new right-wing fascism -- and you KNOW what that led to in Germany!"

Nope, it's too late for Eurabia. (The EU has been focused on erasing national pride and cultural identity for a good while now, claiming that such things cause dissension and ultimately become excuses for war. So, erase all pride-of-culture and replace it with multi-culti "respect for diversity", and tell your citizens they're not allowed to complain when it turns out that the arrogant newcomers are granted more civil rights and institutional protections than they, the natives, receive.)