If you're confused as to the mission, duration and scope of Operation Unlike Bush Wars This One Is Justified Because Hey Look A Squirrel, today's statement from SECDEF Robert Gates should clear things up. 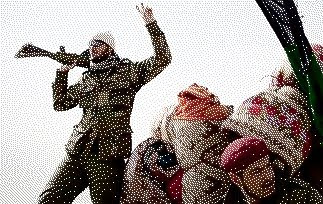 ...Ahead of President Barack Obama's national address Monday to explain his decision to act against the Libyan leader, Defense Secretary Robert Gates and Secretary of State Hillary Rodham Clinton said in appearances on the Sunday talk shows that the intervention had effectively rendered Gadhafi's forces defenseless against air attacks and created the conditions for opposition advances westward.

In interviews taped Saturday, Gates and Clinton also defended the narrowly defined U.N. mandate to prevent atrocities against Libyan civilians and said the U.S. had largely accomplished its goals...

The mission, according to President Obama, is not to kill Muamar Gaddafi. Nor is it to topple his regime. Nor is it, apparently, to do anything but secure the blessing of an amorphous international collection of kooks.

Now that it's been confirmed that rebel forces include Al Qaeda and Muslim Brotherhood fighters, all of the operation's goals are clear. Crystal.