If anyone can make sense of the gibberish emanating from the Obama foreign policy team, please let me know. 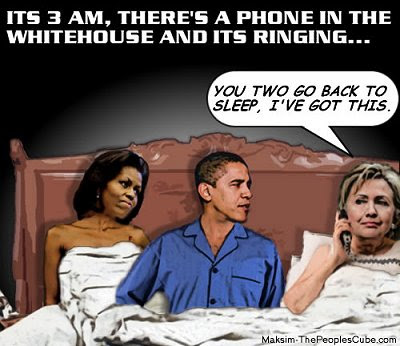 Bloomberg - Secretary of State Hillary Clinton said the U.S. won’t enter into the internal conflict in Syria the way it has in Libya... Syrian President Bashar Al-Assad’s security forces clashed with protesters in several cities yesterday after his promises of freedoms and pay increases failed to prevent dissent from spreading across the country.

Clinton said the elements that led to intervention in Libya -- international condemnation, an Arab League call for action, a United Nations Security Council resolution -- are “not going to happen” with Syria, in part because members of the U.S. Congress from both parties say they believe Assad is “a reformer.”

“What’s been happening there the last few weeks is deeply concerning, but there’s a difference between calling out aircraft and indiscriminately strafing and bombing your own cities,” Clinton said, referring to Libyan leader Muammar Qaddafi’s attacks on the Libyan people, “than police actions which, frankly, have exceeded the use of force that any of us would want to see.”

“Each of these situations is unique,” Clinton said, referring to the Middle Eastern countries dealing with change and unrest, a list that now includes Yemen, Jordan, Egypt, Libya, Morocco, Syria and Bahrain.

• Attacking Saddam Hussein's despotic regime in Iraq: Yes, then no (also: accuse Bush and/or the world's intelligence communities of lying).

• Supporting U.S. ally Hosni Mubarak in Egypt against the vicious Muslim Brotherhood: No.

• Attacking Muamar Gaddafi in Libya for slaughtering his own people: Yes.

• Attacking Iranian puppet Bashar Assad and his Hezbollah apparatus for slaughtering his own people: No.

• Attacking Iran and its pre-nuclear terror regime for slaughtering its own people: No.

"We need better judgment when we decide to send our young men and women into war, that we are making absolutely certain that it is because there is an imminent threat, that American interests are going to be protected, that we have a plan to succeed and to exit, that we are going to train our troops properly and equip them properly and put them on proper rotations and treat them properly when they come home. That is an argument we are going to have an easier time making if they can’t turn around and say: But hold on a second; you supported this. That’s part of the reason why I would be the strongest nominee on this argument of national security." --Candidate Barack Obama, Democratic Debate, 31 January 2008

I would pay good money to see this man polygraphed.

He would pass the polygraph with flying colors. He knows no other way.
He once probably had the capacity to be a learned man but he's been so thoroughly immersed in leftist dogma for so long, he's no longer capable of logical reasoning or reflective critical thinking. That's the primary problem with leftist/progressive/Marxist "thought."
Nothing will change.

Hillary is in way over her head. She should be in a trailer park somewhere in Arkansas. She could be the Czarina of the local Association and make life hell for everyone around her.

As if it's not enough for Barry to flip off Congress we now have Hitlery and Bliebberman discussing the new normal as if it's normal.

I'd pay good money to see this guy decide to go back to the mysterious Never-Never Land from whence he came and take Joey the Maroon with him.

I agree with Trialdog. I'll bet that at any instant, he believes whatever facts are in his head. These types of liberals do not subscribe to reason or morals so they are not thus constrained.

The rest of us use these tools to help seek the truth. There is no truth under liberalism and, in fact, the the mere thought of using reason or morals is a big problem for liberals.