"Media watchers said it was a 'news article' -- Reuters' term for its regular excretion of Leftist propaganda."

President Obama prefers to use the term Kinetic Military Action for War. And Man-Caused Disaster for Terrorist Attack. And, like Big Brother, certain media outlets have embraced the Statists' doublespeak. Exhibit A: Reuters, attempting to cover yesterday's horrific terror bombing in Jerusalem that killed one woman and wounded 30.

A bomb planted in a bag exploded near a bus stop in a Jewish district of Jerusalem on Wednesday, killing a woman and injuring at least 30 people, in an attack police blamed on Palestinian militants.

...Police said it was a "terrorist attack" -- Israel's term for a Palestinian strike. It was the first time Jerusalem had been hit by such a bomb since 2004. 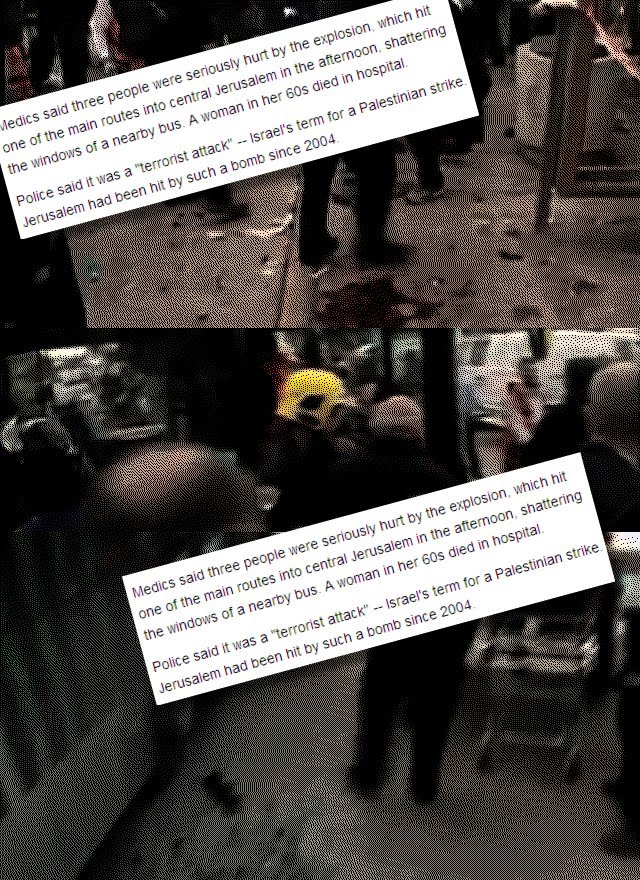 ...Over 500 Israeli civilians died in 140 Palestinian suicide bomb attacks from 2000 to 2007. More than 4,500 Palestinians were killed by Israeli forces in the same period. [Ed: Moral equivalence alert.]

...Israel launched a three-week war on the impoverished coastal enclave in 2009, killing about 1,400 Palestinians and drawing heavy international censure. Hamas, which seized control of Gaza in a 2007 coup, had mostly held fire since then.

The barbaric assaults on Israeli civilians have been going on for decades, not because of any "peace movement", but because Hamas wants to exterminate infidels. Hell, it's in their damn charter.

A more despicable propaganda piece you'd be hard-pressed to find, which is why Reuters deserves its handle of Al Reutzeera.