It would appear that only one demographic group meets the demanding Napolitano standard for terrorists: white conservatives

No, the most diabolical terrorists are Constitutional conservatives who have asked that the federal government enforce its own immigration laws. 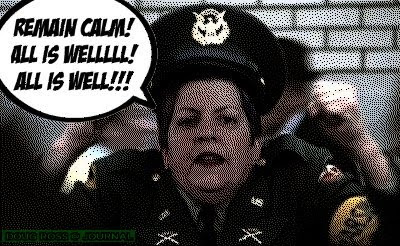 The plan, Operation Closed Campus, is described as a full scale plan and exercise used to educate players in the proper response of a domestic terrorism or school shooting.

Troublesome to parents and community members is the proposed scenario to be acted out by the students, staff, faculty members, and emergency response teams.

The scenario details two white males, ages 17 and 18, with ties to anti-immigration groups and gun enthusiasts, opening fire on a group of minority students, hitting a Hispanic student.

The scenario then develops into “full-scale chaos” with both white male suspects shooting indiscriminately.

Because all of the other man-caused disasters in the last 20 years have involved anti-immigration gun enthusiasts.

Lets see, Jug Ears lives with his Mother-in-Law, has a domineering wife and at least one kid who needs to see a Priest. He has populated his Administration with Muslims, Women and Homo-Sexuals - and they gear up to X-Ray and B*t*h Slap Whitey? Well, I'll tell you, it will take white men and dedicated minorities to bring this Undocumented Halfrican to Justice so order and prestige can be restored to the highest office in the land. And that probably includes re-decorating the White House, especially the Brown Room.