Senate Majority Leader Harry Reid (D, Nev.) blamed “tea party extremists” on Tuesday for blocking a compromise that would allow Congress to keep the government running through September, the latest move by Senate Democrats to deflect responsibility for a partial government shutdown.

“Some Tea Party extremists seem to think ‘compromise’ is a dirty word, and have said that they would rather shut down the government than work with Democrats to find a common-sense, bipartisan solution,” Mr. Reid said in a statement Tuesday...

And why are these CRs even necessary?

Because for the first time in modern history, the last Democrat Congress and Democrat President failed to pass a budget for fiscal year 2011. 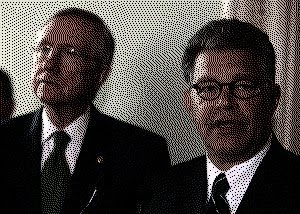 That's not the Republicans' fault.

Furthermore, the last Democrat Congress and the Democrat President rang up more debt in three years ($4.6 trillion) than the country incurred during its first 220 years of existence. During Obama's presidency, the debt has increased 55%.

That's not the Republicans' fault.

Just last month, the federal government registered a $223 billion budget deficit for one month, which was more than the total deficit for the entire year of 2007 ($161 billion).

As for bipartisanship, it was the Democrats' malevolent strategy to exclude Republicans from every major decision over the last two years.

Sick: the protector of cowboy poets, the man who is bankrupting our children and grandchildren, is complaining about a lack of partisanship.

These Democrats have truly lost their minds. They need to be crushed in 2012 and rendered no more a political force than the Whigs. They are that malevolent, that nefarious and that dangerous to the American people.