What exactly this story has to do with economics is beyond me, but Barry Ritholz's popular econ blog -- The Big Picture -- ran a headline earlier today that read "Fox News: Less Honest than Dictatorships."

Well, the post is nothing but a copy-paste of a CNN rush transcript that boils down to the following dialogue. 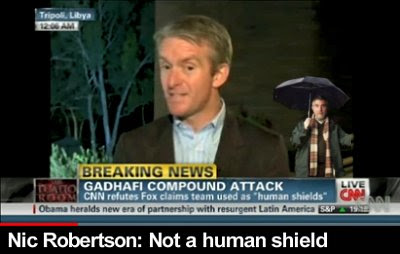 WOLF BLITZER, HOST: On another related – unrelated matter – maybe it is related – I want you to explain what you know about this suggestion Fox News reporting that you, a Reuters crew, some other journalists, were effectively used by Gadhafi as a human shield to prevent Allied fighter planes from coming in and attacking a certain position.

Explain what you know about this.

NIC ROBERTSON, CNN SENIOR INTERNATIONAL CORRESPONDENT: Wolf, this allegation is outrageous and it’s absolutely hypocritical. You know, when you come to somewhere like Libya, you expect lies and deceit from the dictatorship here. You don’t expect it from the other journalists... 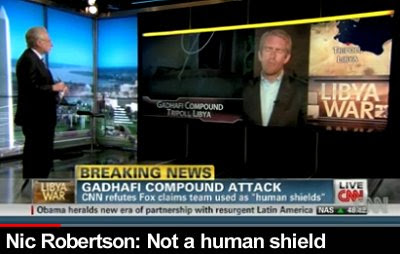 We were taken there. We went in through the security. We filmed the building. We were given 15, 20 minutes to do that, five minutes in Gadhafi’s tent and then we were taken out... And I was literally physically pushed back on the bus when we left... That’s how quickly the government officials wanted to get us out.

Of course, the real story is simple. Jennifer Griffin simply reported what her sources in the defense community told her. No less a source than the left-leaning MediaBistro reported after CNN's diatribe that "Jennifer Griffin [is] sticking by report on journalists being used as human shields in Libya".

Griffin did not get into the media-on-media fracas touched off by her report earlier today in which British sources told her their mission last night was cut short because of the presence of the Western journalists and several Libyan civilians...

“They felt that the civilians and journalists had effectively been used as human shields and that was frustrating to them,” said Griffin tonight. “It was a very close call. In fact one official told me that there was a Reuters crew literally on a spot where they were going to drop a missile.”

...Griffin is sticking by her original report that “the Libyan government is using journalists as human shields.”

In fact, yesterday The New York Times -- not exactly a mouthpiece for the conservative right -- ran a story headlined "At Qaddafi Compound, a Human Shield."

Finally, Amnesty International -- a true right-wing conspiracy if there ever was one -- even published a FAQ regarding Gaddafi's use of human shields ("What about reports that Libya is using ‘human shields’?"

It's in CNN's interest -- given that its ratings are trailing the Hallmark Channel and airport radar -- to foment a "controversy". And leftist econ blogger Barry Ritholz is more than happy to oblige, so long as it means his analysis consists of typing an inflammatory headline, followed by [Ctrl]+[C] and [Ctrl]+[V].

The British government confirmed that they were ready to attack when they were informed that journalists were on site.

This is one of those, "pay me the Krugerrand, Doug" moments. No matter how endlessly you show the reporting to be accurate, all replies to such evidence are screeches of, "man up", "pay up", and "I need that money to move out of my parent's basement".