JudicialWatch has released documents it obtained from the Defense Department that detail an organized campaign by Islamofascists to recruit children and to launch terrorist attacks against the children of "non-believers".

• Extremist groups are not looking for a particular characteristic in a recruit, but prefer juveniles who are poor or are involved in drinking and drugs. The juveniles are looking for happiness and fulfillment in their lives, and they have not found it. For these reasons they are susceptible to being brainwashed by extremist groups. 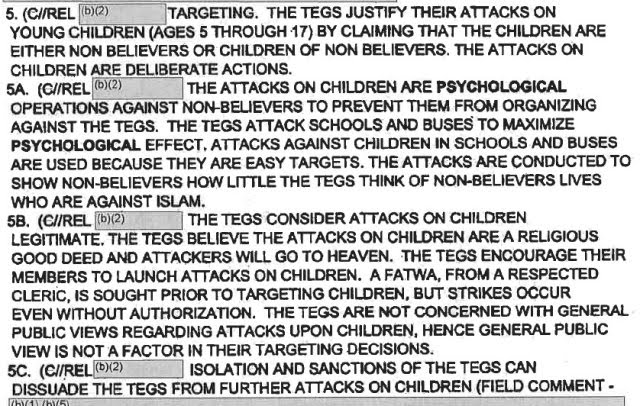 • No juvenile has resisted taking part in an operation. Most juveniles are eager to participate after hearing a religious speech given by one of the trainers at the camp.

If you're waiting patiently for America's un-indicted co-conspirators like CAIR to denounce these 7th century barbarians, I'd advise you not to hold your breath.

This is why they celebrated after they slaughtered the little Fogel children, including a sweet little baby.

Their understanding of psychological operations is part of their problem. I wonder if their homosexual and otherwise pedophile tendencies dictates their targets. Having no children available scares them and they think this scares everyone else. Just... a thought.